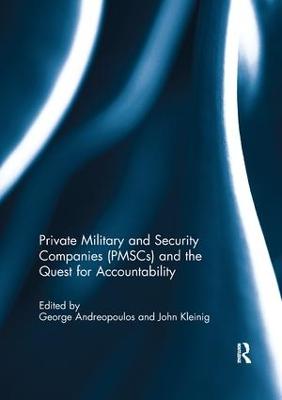 Private Military and Security Companies (PMSCs) and the Quest for Accountability

Private Military and Security Companies (PMSCs) have constituted a perennial feature of the security landscape. Yet, it is their involvement in and conduct during the ongoing wars in Iraq and Afghanistan that have transformed the outsourcing of security services into such a pressing public policy and world-order issue. The PMSCs' ubiquitous presence in armed conflict situations, as well as in post-conflict reconstruction, their diverse list of clients (governments in the developed and developing world, non-state armed groups, intergovernmental and non-governmental organizations, and international corporations) and, in the context of armed conflict situations, involvement in instances of gross misconduct, have raised serious accountability issues. The prominence of PMSCs in conflict zones has generated critical questions concerning the very concept of security and the role of private force, a rethinking of "essential governmental functions," a rearticulation of the distinction between public/private and global/local in the context of the creation of new forms of "security governance," and a consideration of the relevance, as well as limitations, of existing regulatory frameworks that include domestic and international law (in particular international human rights law and international humanitarian law).

This book critically examines the growing role of PMSCs in conflict and post-conflict situations, as part of a broader trend towards the outsourcing of security functions. Particular emphasis is placed on key moral, legal, and political considerations involved in the privatization of such functions, on the impact of outsourcing on security governance, and on the main challenges confronting efforts to hold PMSCs accountable through a combination of formal and informal, domestic as well as international, regulatory mechanisms and processes. It will be of interest to scholars, policymakers, practitioners and advocates for a more transparent and humane security order.

This book was published as a special issue of Criminal Justice Ethics. 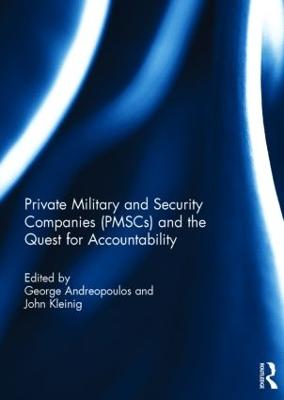 » Have you read this book? We'd like to know what you think about it - write a review about Private Military and Security Companies (PMSCs) and the Quest for Accountability book by George Andreopoulos and you'll earn 50c in Boomerang Bucks loyalty dollars (you must be a Boomerang Books Account Holder - it's free to sign up and there are great benefits!)

A Preview for this title is currently not available.
More Books By George Andreopoulos
View All

Private Military and Security Companies (PMSCs) and the Quest for Accountability
$249.48 $252.00