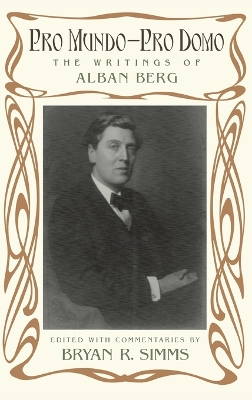 The Writings of Alban Berg

Pro Mundo - Pro Domo: The Writings of Alban Berg contains new English translations of the complete writings of the Viennese composer Alban Berg (1885-1935) and extensive commentaries tracing the history of each essay and its connection to musical culture of the early twentieth century. Berg is now recognized as a classic composer of the modern period, best known for his operas Wozzeck and Lulu. Berg, Anton Webern, and their teacher
Arnold Schoenberg constitute the "Second Viennese School" which played a major role in the transformation of serious music as it entered the modern period. Berg was an avid and skillful writer. His essays
include analytic studies of compositions by Schoenberg, polemics on music and musicians of his day, and lectures and miscellaneous writings on a variety of topics. Throughout his considerable and diverse corpus of writings, Berg alternates between two perspectives: Pro Mundo - Pro Domo, meaning roughly "speaking for all - speaking for myself" commenting at one moment on the general state of culture and the world, and the next moment on his own works. In his early years he also tried his hand at
fictional writing, using works by Ibsen and Strindberg as models. This new English edition contains 47 essays, many of which are little known and have not been previously available in English. » Have you read this book? We'd like to know what you think about it - write a review about Pro Mundo - Pro Domo book by Bryan R. Simms and you'll earn 50c in Boomerang Bucks loyalty dollars (you must be a Boomerang Books Account Holder - it's free to sign up and there are great benefits!)

Bryan R. Simms is Professor in the Thornton School of Music at the University of Southern California. He was formerly editor of the Journal of Music Theory and Music Theory Spectrum, and he has served on the Council of the American Musicological Society and Executive Board of the Society for Music Theory. He specializes in music and musical theory of the 20th century, and his books include most recently The Atonal Music of Arnold Schoenberg: 1908-1923, Music in Western Civilization, and Alban Berg: A Research and Information Guide, second edition.

A Preview for this title is currently not available.
More Books By Bryan R. Simms
View All