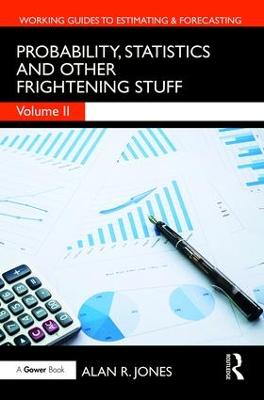 Probability, Statistics and Other Frightening Stuff

Probability, Statistics and Other Frightening Stuff (Volume II of the Working Guides to Estimating & Forecasting series) considers many of the commonly used Descriptive Statistics in the world of estimating and forecasting. It considers values that are representative of the 'middle ground' (Measures of Central Tendency), and the degree of data scatter (Measures of Dispersion and Shape) around the 'middle ground' values.

A number of Probability Distributions and where they might be used are discussed, along with some fascinating and useful 'rules of thumb' or short-cut properties that estimators and forecasters can exploit in plying their trade. With the help of a 'Correlation Chicken', the concept of partial correlation is explained, including how the estimator or forecaster can exploit this in reflecting varying levels of independence and imperfect dependence between an output or predicted value (such as cost) and an input or predictor variable such as size.

Under the guise of 'Tails of the unexpected' the book concludes with two chapters devoted to Hypothesis Testing (or knowing when to accept or reject the validity of an assumed estimating relationship), and a number of statistically-based tests to help the estimator to decide whether to include or exclude a data point as an 'outlier', one that appears not to be representative of that which the estimator is tasked to produce. This is a valuable resource for estimators, engineers, accountants, project risk specialists as well as students of cost engineering.

» Have you read this book? We'd like to know what you think about it - write a review about Probability, Statistics and Other Frightening Stuff book by Alan R. Jones and you'll earn 50c in Boomerang Bucks loyalty dollars (you must be a Boomerang Books Account Holder - it's free to sign up and there are great benefits!)

Alan Jones is Principal Consultant at Estimata Limited, an estimating consultancy service. He is a certified cost estimator/Analyst (US) and certified cost engineer (UK). Prior to setting up his own business he has enjoyed a 40 year career in the UK aerospace and defence industry as an Estimator; culminating in the role of Chief Estimator at BAE Systems. Alan has been a Challenge Panel Member at the Society of Cost Analysis and Forecasting (SCAF) and is Director and Accreditation Board Chairman at the Association of Cost Engineers.

A Preview for this title is currently not available.
More Books By Alan R. Jones
View All