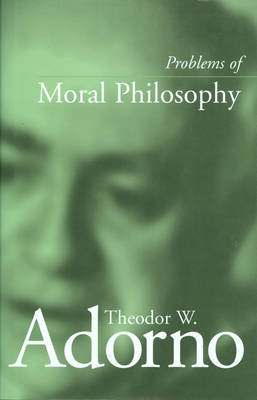 This volume makes Adorno's lectures on the problems of moral philosophy available for the first time to English-speaking readers. It is one of several volumes of Adorno's unpublished writings which are currently being published in Germany, and which will be published in translation by Polity.
The book is organized around an account of Kant's moral theory, and introduces most of the central topics of Adorno's far more difficult work Negative Dialectics. He examines concepts such as the primacy of practical reason, the relation between freedom and experience, and the desubstantialization of moral thought. These and other concepts are discussed in an accessible and entertaining style which is very different from the rest of Adorno's published work.

Problems of Moral Philosophy will be an important resource for scholars drawing on Adorno's thought, and its nature as a lecture course makes it a very useful and accessible introduction for students to Adorno's ideas about moral philosophy. It will be of great interest to those working in philosophy and in social and political thought.

Other Editions - Problems of Moral Philosophy by Theodor W. Adorno 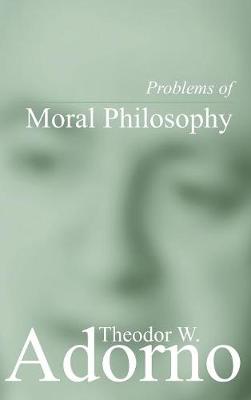 » Have you read this book? We'd like to know what you think about it - write a review about Problems of Moral Philosophy book by Theodor W. Adorno and you'll earn 50c in Boomerang Bucks loyalty dollars (you must be a Boomerang Books Account Holder - it's free to sign up and there are great benefits!)

Theodor W. Adorno (1903-1969) was a prominent member of the Frankfurt School and one of the most influential thinkers of the twentieth century in the areas of social theory, philosophy and aesthetics.