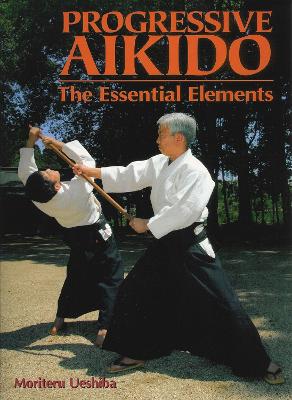 A practical guide - written by the grandson of the founder of Aikido - for those seeking greater understanding of both the basic forms and advanced techniques.

Aikido was developed by Morihei Ueshiba, who drew on Japan's rich history of martial arts to develop an entirely new system that preserves the classical tradition within a contemporary context. In Progressive Aikido, Moriteru Ueshiba, the grandson of the founder and the third Doshu (living symbol and embodiment of the spirit of Aikido), focuses on the most fundamental principle of Aikido- proper movement. Using hundreds of photographs and readily accessible explanations, Ueshiba shows how this crucial technique is the basis for all training, whether as a beginner or as a senior instructor. The book is based on a systematic, step-by-step approach that emphasizes proper movement to train in a range of Aikido techniques, from basic to advanced.

» Have you read this book? We'd like to know what you think about it - write a review about Progressive Aikido: The Essential Elements book by Moriteru Ueshiba and you'll earn 50c in Boomerang Bucks loyalty dollars (you must be a Boomerang Books Account Holder - it's free to sign up and there are great benefits!)

MORITERU UESHIBA was born in 1951 in Tokyo, the grandson of Morihei Ueshiba, the founder of Aikido, and son of the late Kisshomaru Ueshiba, the second Doshu. He graduated from Meiji Gakuin University in 1976, became master of the Aikido World Headquarters in 1986, and in 1996 was named chairman of the Aikikai Foundation. In 1999 he became Aikido Doshu after his father's death, and the permanent chairman of the International Aikido Federation. He holds several important posts related to the martial arts and is a trustee of the Nippon Budokan, the "hall of martial arts" located in central Tokyo.