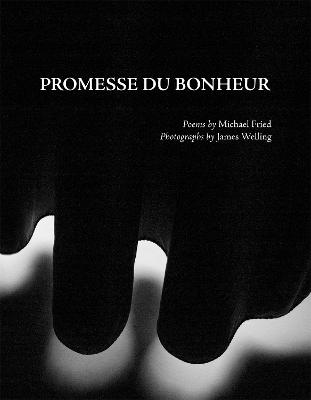 Michael Fried is as much a poet as he is a critic. His experiences among artworks and luminaries of the art world have resulted in a canonized body of criticism, but they have also provided the raw material for many of the poems in his newest collection, Promesse du Bonheur. Fried's passion, lyricism, and humor, which have been lauded by Allen Grossman and J.M. Coetzee, are on display as he explores the people and the objects that have moved him-great minds and great works of art. Along the way, Fried begins to reveal himself to the reader: he is at once a student, unsure of himself; a young man, ambitious and in love; a committed champion of artists; a world-class intellectual among intellectual peers; and a poet, transmuting the world around him. Here we find the poet-critic at his most complete. Beyond presenting new works, Promesse du Bonheur breaks ground for Fried by combining eighty poems, a mix of lyric and prose poems, with thirty-three photographs, most of them made, all of them chosen by renowned American photographer James Welling. The photographs throughout often stand in oblique relation to the poems, and must be interpreted in their own right, as images and as complementary pieces of this mesmerizing whole. Written under the epigraph of Ralph Waldo Emerson's urging in "Self-Reliance"- "Accept the place the divine providence has found for you, the society of your contemporaries, the connection of events"-the poems engage diverse subjects: from the high modernist art world of the 1960s to a major poet's tragic loss of memory, from exemplary works and persons such as Degas's The Fallen Jockey, Kleist's Prince of Homburg, Menzel's drawings, Edouard Manet, Anna Akhmatova, Jacques Derrida, Stanley Cavell, Ian Hamilton, and John Harbison, to erotic love, late fatherhood, the death of parents and friends, and the onset of age. Promesse du Bonheur is a uniquely vivid and compelling volume, at once a collection of wideranging yet intimately related poems and a brilliant photobook, that aims to hold the reader/viewer in its spell from first page to last.

» Have you read this book? We'd like to know what you think about it - write a review about Promesse du Bonheur book by Michael Fried and you'll earn 50c in Boomerang Bucks loyalty dollars (you must be a Boomerang Books Account Holder - it's free to sign up and there are great benefits!)

Michael Fried is a poet, art critic, art historian, and literary scholar. His many books include Absorption and Theatricality: Painting and Beholder in the Age of Diderot (1980), Art and Objecthood: Essays and Reviews (1998), and The Moment of Caravaggio (2010). Previous books of poems are Powers (1973), To the Center of the Earth (1994), and The Next Bend in the Road (2004). Fried is the J. R. Herbert Boone Chair in the Humanities at Johns Hopkins University. James Welling has been questioning the norms of representation since the 1970s. His work centers on an exploration of photography, shuffling the elemental components of the medium to produce a distinctly uncompromising body of work. Welling is also intensely interested in cultural and personal ideas of memory in his work. In opening up the medium of photography for experimentation, James Welling's practice has influenced an entire generation of artists and photographers. nonsite.org is an online, open access, peer-reviewed quarterly journal of scholarship in the arts and humanities. It is affiliated with Emory College of Arts and Sciences of Emory University.

A Preview for this title is currently not available.
More Books By Michael Fried
View All