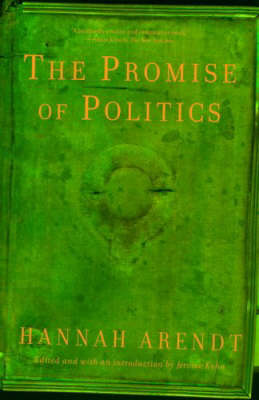 The Promise Of Politics

Description - The Promise Of Politics by Hannah Arendt

In The Promise of Politics, Hannah Arendt examines the conflict between philosophy and politics. In particular, she shows how the tradition of Western political thought, which extends from Plato and Aristotle to its culmination in Marx, failed to account for human action. The concluding section of the book, "Introduction into Politics," examines an issue that is as timely today as it was when Arendt first wrote about it fifty years ago-the modern prejudice against politics. When politics is considered as a means to an end that lies outside of itself, argues Arendt, when force is used to create "freedom," the very existence of political principles is imperiled.

Book Reviews - The Promise Of Politics by Hannah Arendt

» Have you read this book? We'd like to know what you think about it - write a review about Promise Of Politics book by Hannah Arendt and you'll earn 50c in Boomerang Bucks loyalty dollars (you must be a Boomerang Books Account Holder - it's free to sign up and there are great benefits!)

Hannah Arendt was born in Hanover, Germany, in 1906, fled to Paris in 1933, and came to the United States after the outbreak of World War II. She was editorial director of Schocken Books from 1946 to 1948. She taught at Berkeley, Princeton, the University of Chicago, and The New School for Social Research. Arendt died in 1975. From the Hardcover edition.

A Preview for this title is currently not available.
More Books By Hannah Arendt
View All