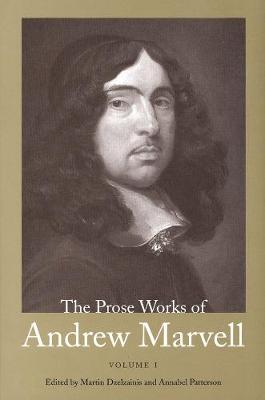 The Prose Works of Andrew Marvell

Andrew Marvell (1621?78) is best known today as the author of a handful of exquisite lyrics and provocative political poems. In his own time, however, Marvell was famous for his brilliant prose interventions in the major issues of the Restoration, religious toleration, and what he called ?arbitrary? as distinct from parliamentary government. This is the first modern edition of all Marvell's prose pamphlets, complete with introductions and annotation explaining the historical context. Four major scholars of the Restoration era have collaborated to produce this truly Anglo-American edition.
From the Rehearsal Transpros'd, a serio-comic best-seller which appeared with tacit permission from Charles II himself, through the documentary Account of the Growth of Popery and Arbitrary Government, Marvell established himself not only as a model of liberal thought for the eighteenth century but also as an irresistible new voice in political polemic, wittier, more literary, and hence more readable than his contemporaries.

» Have you read this book? We'd like to know what you think about it - write a review about Prose Works of Andrew Marvell book by Andrew Marvell and you'll earn 50c in Boomerang Bucks loyalty dollars (you must be a Boomerang Books Account Holder - it's free to sign up and there are great benefits!)