The role of metal ions in protein folding and structure is a critical topic to a range of scientists in numerous fields, particularly those working in structural biology and bioinorganic chemistry, those studying protein folding and disease, and those involved in the molecular and cellular aspects of metals in biological systems. Protein Folding and Metal Ions: Mechanisms, Biology and Disease presents the contributions of a cadre of international experts who offer a comprehensive exploration of this timely subject at the forefront of current research.
Divided into four sections, this volume: Provides case study examples of protein folding and stability studies in particular systems or proteins that comprise different metal ions of co-factors Reviews the proteins that shuttle metal ions in the cell to a particular target metalloprotein Illustrates how metal binding can be connected to pathological protein conformations in unrelated diseases, from cancer to protein deposition disorders such as Parkinson's disease Addresses protein redesign of metal-containing proteins by computational methods, folding simulation studies, and work on model peptides -- dissecting the relative energetic contribution of metals sites to protein folding and stability Together, the 13 chapters in this text cogently describe the state of the science today, illuminate current challenges, propose future possibilities, and encourage further study in this area that offers much promise especially with regard to novel approaches to the treatment of some of the most challenging and tragic diseases. 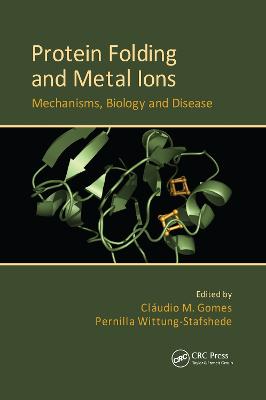 » Have you read this book? We'd like to know what you think about it - write a review about Protein Folding and Metal Ions book by Claudio M. Gomes and you'll earn 50c in Boomerang Bucks loyalty dollars (you must be a Boomerang Books Account Holder - it's free to sign up and there are great benefits!)

Claudio M. Gomes is group leader at the Instituto Tecnologia Quimica e Biologica, a research institute affiliated with the Universidade Nova de Lisboa, Oeiras, Portugal. Born in 1970, Claudio earned his PhD from the Instituto Tecnologia Quimica e Biologica in 1999, as a Gulbenkian PhD program in biology and medicine graduate. From 2000 onward, he gradually switched his research interests from bioenergetics and metalloprotein structure-function toward protein folding and structural biophysics of misfolding diseases. Until setting up his independent laboratory in 2003, he was assistant professor at the Faculdade de Ciencias e Tecnologia, Universidade Nova de Lisboa, where he started teaching in 2000. Claudio has published more than 70 peer-reviewed papers. Pernilla Wittung-Stafshede has been a professor in biological chemistry in the Chemistry Department at Umea University, Umea, Sweden since 2008. Born in 1968, she earned a PhD in physical chemistry from Chalmers University, Gothenburg, Sweden, in 1996. During 1997--1998, she did a postdoctoral period at Caltech, Pasadena, California. In 1999 she began her independent research career, with a focus on the role of metals in protein folding, as a chemistry professor at Tulane University, New Orleans, Louisiana. After 5 years at Tulane, she moved to Rice University, Houston, Texas in 2004 and became a professor in biochemistry. Pernilla has graduated 10 PhD students to date, has obtained several awards, and has published over 150 peer-reviewed papers.

A Preview for this title is currently not available.
More Books By Claudio M. Gomes
View All