The Psychology of Criminal Conduct

Description - The Psychology of Criminal Conduct by James Bonta

The Psychology of Criminal Conduct, Sixth Edition, provides a psychological and evidence-informed perspective of criminal behavior that sets it apart from many criminological and mental health explanations of criminal behavior. Drawing upon the General Personality and Cognitive Social Learning theory, James Bonta and Donald Andrews provide an overview of the theoretical context and major knowledge base of the psychology of criminal conduct, discuss the eight major risk/need factors of criminal conduct, examine the prediction and classification of criminal behavior along with prevention and rehabilitation, and summarize the major issues in understanding criminal conduct. This book also offers the Risk/Need/Responsivity (RNR) model of offender assessment and treatment that has guided developments in the subject throughout the world.

In this edition, the first since Andrews' death, Bonta carefully maintains the book's original contributions while presenting these core concepts succinctly, clearly, and elegantly. Appropriate for advanced undergraduates and graduate students as well as for scholars, researchers, and practitioners, The Psychology of Criminal Conduct, Sixth Edition, further extends and refines the authors' body of work.

Other Editions - The Psychology of Criminal Conduct by James Bonta 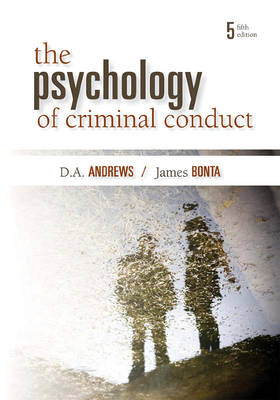 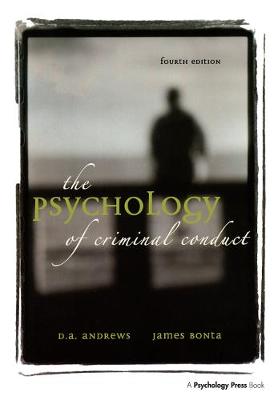 Book Reviews - The Psychology of Criminal Conduct by James Bonta

» Have you read this book? We'd like to know what you think about it - write a review about Psychology of Criminal Conduct book by James Bonta and you'll earn 50c in Boomerang Bucks loyalty dollars (you must be a Boomerang Books Account Holder - it's free to sign up and there are great benefits!)

James Bonta served as Director of Corrections Research at Public Safety Canada from 1990 until 2015. He received his Ph.D. in Clinical Psychology from the University of Ottawa in 1979. Bonta was a psychologist, and later Chief Psychologist, at the Ottawa-Carleton Detention Centre, a maximum-security remand facility for adults and young offenders. Throughout his career, Bonta has held various academic appointments and professional posts and was a member of the Editorial Advisory Boards for the Canadian Journal of Criminology and Criminal Justice and Behavior. He is a Fellow of the Canadian Psychological Association, a recipient of the Association's Criminal Justice Section's Career Contribution Award for 2009, the Queen Elizabeth II Diamond Jubilee Medal, 2012, the Maud Booth Correctional Services Award, 2015, and the 2015 Community Corrections Award from the International Corrections and Prisons Association. The late D.A. Andrews was a noted criminologist affiliated with Carleton University throughout his academic career. His work on the psychology of criminal conduct produced what became known as the "theory of correctional intervention," which set the standard for successful intervention practices throughout the field of corrections worldwide. He was a founding member of Carleton's Criminology and Criminal Justice Program and a Fellow of the Canadian Psychological Association. He received numerous awards for his work in the criminal justice field, including those from the American Probation and Parole Association, Correctional Service Canada, the International Community Corrections Association, and the American Society of Criminology. After his retirement, he remained active in the criminal justice field as a Professor Emeritus and Distinguished Research Professor.

A Preview for this title is currently not available.
More Books By James Bonta
View All