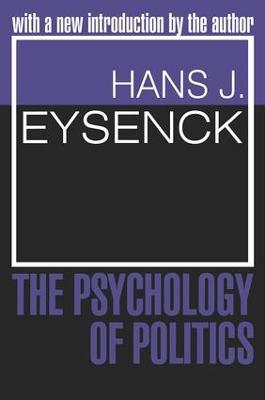 The Psychology of Politics

Description - The Psychology of Politics by Hans Eysenck

In writing "The Psychology of Politics", Hans Eysenck had two aims in mind: to write a book about modern developments in the field of attitude studies which would be intelligent to the layman; and one that would integrate into one consistent theoretical system a large number of contributions on the topic from different fields. Eysenck believes that science has something to say about such problems as anti-Semitism, the origin and growth of fascist and communist ideologies, the causal determinants of voting behaviour, the structure of opinions and attitudes, and the relationship between politics and personality. He seeks to rescue these factual findings from the obscurity of technical journals and present them in a more accessible form. The research presented in this book outlines the main principles of organization and structure in the field of attitudes. These principles account in a remarkably complete and detailed manner for the systems of political organization found in Great Britain, that is, the Conservative, Liberal and Socialist parties, and the communist and fascist groups.
Next, Eysenck relates these principles to the system of personality structure which for many years formed the main focus on research activity at the Institute of Psychiatry in London. "The Psychology of Politics" integrates attitude research with modern learning theory. In his new introduction, Eysenck writes that his research and personal experiences in Germany led him to believe that authoritarianism could appear equally well on the left as on the right. He saw Stalin as equally authoritarian as Hitler, and communism equally as totalitarian as Nazism. "The Psychology of Politics" contains the evidence and arguments Eysenck used to demonstrate his approach. This volume is of enduring significance for psychologists, political theorists and historians. It is by indirection a major statement in modern liberalism.

Other Editions - The Psychology of Politics by Hans Eysenck 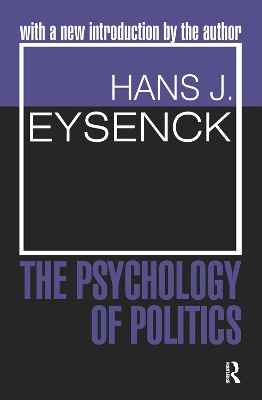 Book Reviews - The Psychology of Politics by Hans Eysenck

» Have you read this book? We'd like to know what you think about it - write a review about Psychology of Politics book by Hans Eysenck and you'll earn 50c in Boomerang Bucks loyalty dollars (you must be a Boomerang Books Account Holder - it's free to sign up and there are great benefits!)


A Preview for this title is currently not available.
More Books By Hans Eysenck
View All

The Dynamics of Anxiety and Hysteria: An Experimental Application of Modern Learning Theory to Psychiatry
$249.48 $252.00