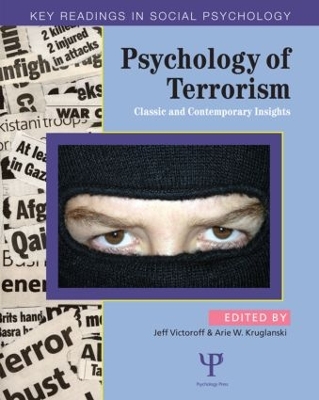 Substate terrorism now represents one of the gravest threats to human civilizations. As the frequency of interstate wars has declined since the end of the Second World War, terrible violence against innocent civilians is increasingly perpetrated by non-state groups with extreme agendas and virtually no restraints. Why do people become terrorists? Are terrorists crazy? Simply evil? Normal people driven to extremes? What social factors and tensions are most likely to provoke terrorist behaviors? And how can we use our rapidly growing understanding of the psychology of terrorism to anticipate oming attacks and protect the international community?

Psychology of Terrorism is a collection of the best classic and contemporary writings about the mind of the terrorist. Carefully selected by a panel of world-renowned authorities for value and readability, this collection provides the reader with deep knowledge and unique insights into the ideas, feelings, and social influences of modern terrorist groups. General readers who wish to understand this deadly phenomenon, students and scholars of human psychology or political science, and decision makers facing the challenge of designing effective counterterrorism policies will enjoy and profit from these essential readings and the inescapable conclusion they suggest: By ignoring the psychology of terrorism, Western nations have been making grave errors in the so-called war on terrorism. Understanding the deep roots of terrorist behaviors gives us tools that are absolutely vital to any effort in reducing this escalating threat.

Other Editions - Psychology of Terrorism by Jeff Victoroff » Have you read this book? We'd like to know what you think about it - write a review about Psychology of Terrorism book by Jeff Victoroff and you'll earn 50c in Boomerang Bucks loyalty dollars (you must be a Boomerang Books Account Holder - it's free to sign up and there are great benefits!)

Jeff Victoroff began his career in academic medicine. After training in Neurology and Psychiatry at Harvard and a fellowship in Neurobehavior at UCLA, he joined the faculty of the University of Southern California Keck School of Medicine. His initial research focused on neurodegeneration and on the reasons for aggression seen in patients with neurological disorders. After 9/11 he made a dramatic change in his research career to study the deep causes of human aggression, including both individual and collective violence, from a transdisciplinary perspective. Arie W. Kruglanski is a Distinguished University Professor at the University of Maryland and one of the most cited researchers in Social Psychology. His interests have centered on the psychology of judgment and knowledge formation, as well as on the processes of group decision making, goal formation and implementation. He has served as Editor of the Journal of Personality and Social Psychology: Attitudes and Social Cognition and the Personality and Social Psychology Bulletin. Among other distinctions, he has received the Donald T. Campbell Award for Distinguished Scientific Contribution to Social Psychology, the Humboldt Foundation Life Achievement Award (Forschungpreis), and the NIMH Research Scientist Award Ko5. His publications include over 180 scientific literature articles, chapters, and books on social personality psychology. He is Editor of two Psychology Press series: Key Readings in Social Psychology and Principles of Social Psychology; and a co-editor of a series of upper-level texts called Frontiers of Social Psychology.

A Preview for this title is currently not available.
More Books By Jeff Victoroff
View All