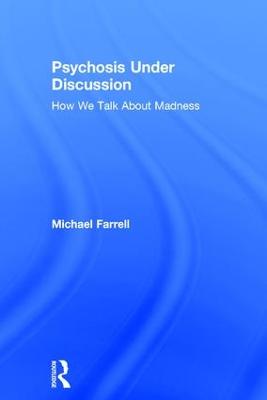 How We Talk About Madness

Psychosis Under Discussion: How We Talk About Madness examines the ways in which psychosis is discussed by considering the relationship between language and the perception of mental disorder. A wide range of perspectives is discussed - including historical terms, personal accounts, psychiatric terminology, psychoanalysis and later theoretical analyses, advocacy, anti-psychiatry, slang and humour, and media coverage - and each way of discussing psychosis is revealing. For example, psychiatric terminology and related research, in its efforts to understand and clarify can seem distancing, dispassionate, and too sure of its ground, whereas the language of advocacy, while being supportive and sensitive, can also seem euphemistic and evasive.

In the discourse of mental disorder, both the content of views and the manner in which they are expressed are influential, making it important to take into account both. Psychosis Under Discussion puts these and other important issues under the microscope. International in range, the book's analysis draws on psychiatry, psychology, philosophy, linguistics and history. Written in Michael Farrell's well-known clear and direct style, the book is essential reading for all those interested in understanding mental disorder and the role of language.

Other Editions - Psychosis Under Discussion by Michael Farrell » Have you read this book? We'd like to know what you think about it - write a review about Psychosis Under Discussion book by Michael Farrell and you'll earn 50c in Boomerang Bucks loyalty dollars (you must be a Boomerang Books Account Holder - it's free to sign up and there are great benefits!)

Michael Farrell managed a UK-wide psychometric project for City University, London and directed a national initial teacher-training project for the UK Government Department of Education; for over a decade, he led teams inspecting mainstream and special schools and units (boarding, day, hospital, psychiatric). Currently, he works as a private consultant with a range of clients and has lectured or provided consultancy services in various countries including China, Japan, the Seychelles, Australia, Peru, Sweden and the UK. He has broadcast on the BBC World Service and on UK national radio and has written articles in a range of medical, psychological, legal and educational journals. His many books, which are translated into European and Asian languages, include Debating Special Education (Routledge, 2010) and New Perspectives in Special Education: Contemporary Philosophical Debates (Routledge, 2012).

A Preview for this title is currently not available.
More Books By Michael Farrell
View All

Educating Special Students: An introduction to provision for learners with disabilities and disorders
$239.58 $242.00