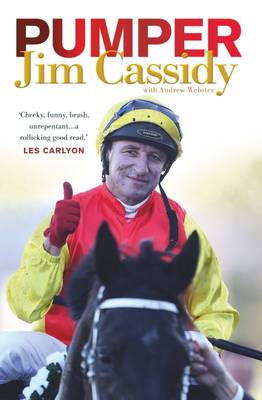 Brilliance in the saddle and bald-faced cheek in the press made Cassidy the Australian racetrack's most beloved and controversial character. His horse whispering gifts, gambler's charm and maverick wit always made him a favourite with the punters, trainers and journalists...but rarely officialdom.

Cassidy's fast life and uncensored opinions led to his exile after the Jockey Tapes scandal in the '90s. Broke but never broken, he fought back. And even when he was back page and front page news, Cassidy's popularity never waned. As he'd quip in victory, 'Ring-a-ding-ding, Pumper's the king!'

Honest, heartfelt and often hilarious, Pumper is Jim Cassidy's explosive autobiography - a page-turning thrill-ride through his many adventures on and off the track.

» Have you read this book? We'd like to know what you think about it - write a review about Pumper book by Jim Cassidy and you'll earn 50c in Boomerang Bucks loyalty dollars (you must be a Boomerang Books Account Holder - it's free to sign up and there are great benefits!)

Jim Cassidy (b.1963) is the third ever jockey to win over 100 Group 1 races. Born in Lower Hutt, New Zealand, he won the 1983 Melbourne Cup on Kiwi and the Caulfield-Melbourne Cup double in 1997 on Might And Power. He is a three-time winner of the Australian Derby (1990, 1993, 2009). He retired from racing in 2015. Cassidy has three daughters and lives in Sydney. Andrew Webster is chief sports writer for the Sydney Morning Herald. He appears regularly on TV and radio and has authored several books, including Supercoach: The Life and Times of Jack Gibson and 2014 bestseller The Voice: The Life of Ray Warren.