Description - Purgatory and Piety in Brittany 1480-1720 by Elizabeth C. Tingle

The concept of Purgatory was a central tenet of late-medieval and early-modern Catholicism, and proved a key dividing line between Catholics and Protestants. However, as this book makes clear, ideas about purgatory were often ill-defined and fluid, and altered over time in response to particular needs or pressures. Drawing upon printed pamphlets, tracts, advice manuals, diocesan statutes and other literary material, the study traces the evolution of writing and teaching about Purgatory and the fate of the soul between 1480 and 1720. By examining the subject across this extended period it is argued that belief in Purgatory continued to be important, although its role in the scheme of salvation changed over time, and was not a simply a story of inevitable decline. Grounded in a case study of the southern and western regions of the ancien regime province of Brittany, the book charts the nature and evolution of 'private' intercessory institutions, chantries, obits and private chapel foundation, and 'public' forms, parish provision, confraternities, indulgences and veneration of saints. In so doing it underlines how the huge popularity of post-mortem intercession underwent a serious and rapid decline between the 1550s and late 1580s, only to witness a tremendous resurgence in popularity after 1600, with traditional practices far outstripping the levels of usage of the early sixteenth century. Offering a fascinating insight into popular devotional practices, the book opens new vistas onto the impact of Catholic revival and Counter Reform on beliefs about the fate of the soul after death.

Other Editions - Purgatory and Piety in Brittany 1480-1720 by Elizabeth C. Tingle 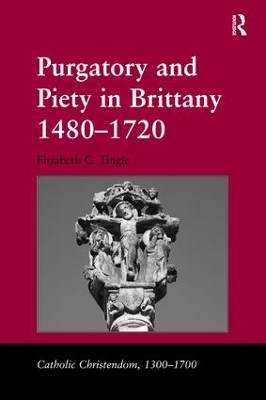 » Have you read this book? We'd like to know what you think about it - write a review about Purgatory and Piety in Brittany 1480-1720 book by Elizabeth C. Tingle and you'll earn 50c in Boomerang Bucks loyalty dollars (you must be a Boomerang Books Account Holder - it's free to sign up and there are great benefits!)

Elizabeth C. Tingle is Subject Leader and Associate Professor in History at the University of Plymouth. Her research interests are the French Wars of Religions and Catholic religious culture in France in the sixteenth and seventeenth centuries. She has published Authority and Society in Nantes during the Wars of Religion 1558-1598 (Manchester University Press, 2006) and other articles and essays.

A Preview for this title is currently not available.
More Books By Elizabeth C. Tingle
View All