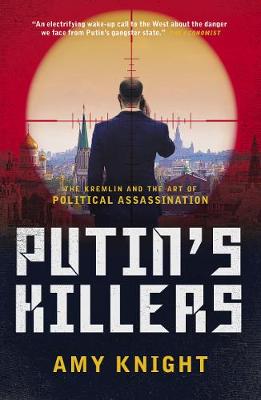 Putin's Killers: The Kremlin and the Art of Political Assassination

Description - Putin's Killers: The Kremlin and the Art of Political Assassination by Amy Knight

Ever since Vladimir Putin came to power in Russia, his critics have turned up dead on a regular basis. According to Amy Knight, this is no coincidence. In Putin's Killers, the KGB scholar ties dozens of victims together to expose a campaign of political murder during Putin's reign that even includes terrorist attacks such as the Boston Marathon bombing.

Russia is no stranger to political murder, from the tsars to the Soviets to the Putin regime, during which many journalists, activists and political opponents have been killed. Kremlin defenders like to say, 'There is no proof,' however convenient these deaths have been for Putin, and, unsurprisingly, because he controls all investigations, Putin is never seen holding a smoking gun.

Putin's Killers is a story long hidden in plain sight with huge ramifications.

Book Reviews - Putin's Killers: The Kremlin and the Art of Political Assassination by Amy Knight

» Have you read this book? We'd like to know what you think about it - write a review about Putin's Killers: The Kremlin and the Art of Political Assassination book by Amy Knight and you'll earn 50c in Boomerang Bucks loyalty dollars (you must be a Boomerang Books Account Holder - it's free to sign up and there are great benefits!)


A Preview for this title is currently not available.
More Books By Amy Knight
View All

Depositions - Scenes from the late Medieval Church and the Modern Museum
No Stock on Hand, Supplier Has No Due Date for Supply.
$56.69 $62.99