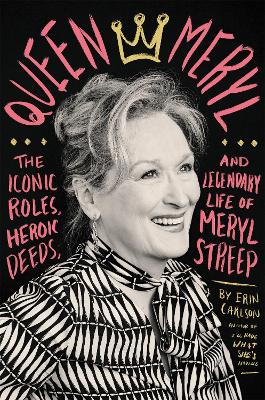 Meryl Streep is the most celebrated actress of our time. She's a chameleon who disappears fully into each character she plays. She never tackles the same role twice. Instead, she leverages her rarified platform to channel a range of tough, complicated women--Margaret Thatcher, Karen Silkwood, the Anna Wintour avatar Miranda Priestly--rather than limit herself to marginal roles for which other actresses must settle: Supportive Wife. Supportive Mother. Supportive Yet Utterly Disposable Love Interest to the Leading Man. Streep will have none of that.The once-awkward, frizzy-haired suburban teen blossomed into a rising ingenue who quickly made a name on stage at Vassar College and the Yale School of Drama, where she pursued prestigious theater degrees. She came of age during the women's movement of the Sixties and Seventies, and has worn her activism on her sleeve even when it was unfashionable. When she reached 40, the age when many leading ladies in Hollywood fully transition to those "supportive" roles, Streep plunged forward, taking her pick of parts that interested her and winning a pile of awards along the way. She's broken records with 21 Oscar nominations, winning Best Actress twice for SOPHIE'S CHOICE and THE IRON LADY and Best Supporting Actress for KRAMER VS. KRAMER. Meanwhile, she remained an unlikely box-office draw, her clout even managing

» Have you read this book? We'd like to know what you think about it - write a review about Queen Meryl: The Iconic Roles, Heroic Deeds, and Legendary Life of Meryl Streep book by Erin Carlson and you'll earn 50c in Boomerang Bucks loyalty dollars (you must be a Boomerang Books Account Holder - it's free to sign up and there are great benefits!)


A Preview for this title is currently not available.
More Books By Erin Carlson
View All