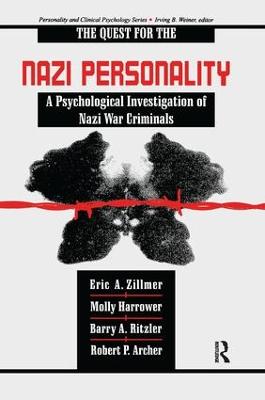 The Quest for the Nazi Personality

Description - The Quest for the Nazi Personality by Eric A. Zillmer

Half a century after the collapse of the Nazi regime and the Third Reich, scholars from a range of fields continue to examine the causes of Nazi Germany. An increasing number of young Americans are attempting to understand the circumstances that led to the rise of the Nazi party and the subsequent Holocaust, as well as the implication such events may have for today as the world faces a resurgence of neo-Nazism, ethnic warfare, and genocide.

In the months following World War II, extensive psychiatric and psychological testing was performed on over 200 Nazis in an effort to understand the key personalities of the Third Reich and of those individuals who "just followed orders." In addressing these issues, the current volume examines the strange history of over 200 Rorschach Inkblot protocols that were administered to Nazi war criminals and answers such questions as:
* Why the long delay in publishing protocols?
* What caused such jealousies among the principals?
* How should the protocols be interpreted?
* Were the Nazis monsters or ordinary human beings?

This text delivers a definitive and comprehensive study of the psychological functioning of Nazi war criminals -- both the elite and the rank-and-file. In order to apply a fresh perspective to understanding the causes that created such antisocial behavior, these analyses lead to a discussion within the context of previous work done in social and clinical psychology. Subjects discussed include the authoritarian personality, altruism, obedience to authority, diffusion of responsibility, and moral indifference. The implications for current political events are also examined as Neo-Nazism, anti-Semitism, and ethnic hate are once again on the rise. While the book does contain some technical material relating to the psychological interpretations, it is intended to be a scholarly presentation written in a narrative style. No prior knowledge of psychological testing is necessary, but it should be of great benefit for those interested in the Rorschach Inkblot test, or with a special interest in psychological testing, personality assessment, and the history of psychology. It is also intended for readers with a broad interest in Nazi Germany.


Buy The Quest for the Nazi Personality by Eric A. Zillmer from Australia's Online Independent Bookstore, Boomerang Books.


Other Editions - The Quest for the Nazi Personality by Eric A. Zillmer 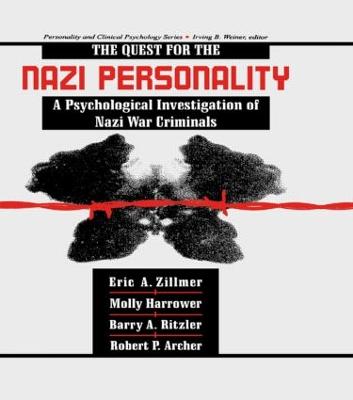 Book Reviews - The Quest for the Nazi Personality by Eric A. Zillmer

» Have you read this book? We'd like to know what you think about it - write a review about Quest for the Nazi Personality book by Eric A. Zillmer and you'll earn 50c in Boomerang Bucks loyalty dollars (you must be a Boomerang Books Account Holder - it's free to sign up and there are great benefits!)


A Preview for this title is currently not available.
More Books By Eric A. Zillmer
View All