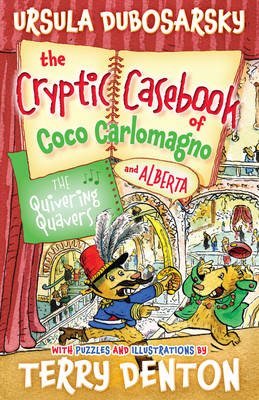 The Quivering Quavers: The Cryptic Casebook of Coco Carlomagno (and Alberta) Bk 5

Description - The Quivering Quavers: The Cryptic Casebook of Coco Carlomagno (and Alberta) Bk 5 by Ursula Dubosarsky

Coco is the well-respected, if somewhat easily startled, Chief of Police in Buenos Aires. Alberta is his more sensible cousin. Together they crack the cases that confound this puzzling city.

Coco Carlomagno is trying to avert a national disaster. La Bella Cucharita, the highly strung world-famous opera singer, is due to make her return to the stage after an unfortunate nerve-wracking incident - but a strange message has her rattled. Who on earth would send La Bella Cucharita mysterious notes on the eve of such an eagerly awaited performance?

Luckily Coco is on the case, and with a little help from his logic-loving cousin Alberta, he can discover just who is behind the quivering quavers.

» Have you read this book? We'd like to know what you think about it - write a review about Quivering Quavers: The Cryptic Casebook of Coco Carlomagno (and Alberta) Bk 5 book by Ursula Dubosarsky and you'll earn 50c in Boomerang Bucks loyalty dollars (you must be a Boomerang Books Account Holder - it's free to sign up and there are great benefits!)

Ursula Dubosarsky is widely regarded as one of the most talented and original writers in Australia today. Her work ranges from multi-award-winning novels for older readers such as Abyssinia, Theodora's Gift, The Red Shoe and the 2012 CBCA-shortlisted The Golden Day, to her highly-acclaimed and hilarious picture books with Andrew Joyner such as The Terrible Plop. Ursula has also collaborated with Tohby Riddle in their unique and award-winning series that takes an entertaining journey through English language, The Word Spy and Return of the Word Spy. Terry Denton has written and illustrated many popular and funny books, including Gasp! the breathtaking adventures of a fish left home alone, the madly inventive Storymaze series and his books for younger children about Wombat and Fox. He is also a long-time collaborator with bestselling author Andy Griffiths and their books, including the bestselling 13-Storey Treehouse and 26-Storey Treehouse series, The Cat on the Mat is Flat, The Bad Book and the hilarious Just! series, have won every children's choice award in the country.

Thea Stilton and the Legend of the Fire Flowers
Thea Stilton
$11.04 $12.99
More Books By Ursula Dubosarsky
View All