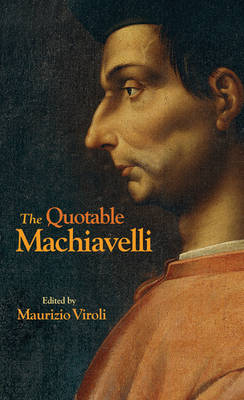 Niccolo Machiavelli (1469-1527) is the father of modern political thought, but he is also one of the greatest writers of the Renaissance and his wisdom and style extend far beyond politics to encompass a compelling philosophy of life as well. In The Quotable Machiavelli, Maurizio Viroli, one of the world's leading Machiavelli scholars, offers a ric

» Have you read this book? We'd like to know what you think about it - write a review about Quotable Machiavelli book by Niccolo Machiavelli and you'll earn 50c in Boomerang Bucks loyalty dollars (you must be a Boomerang Books Account Holder - it's free to sign up and there are great benefits!)

A Preview for this title is currently not available.
More Books By Niccolo Machiavelli
View All