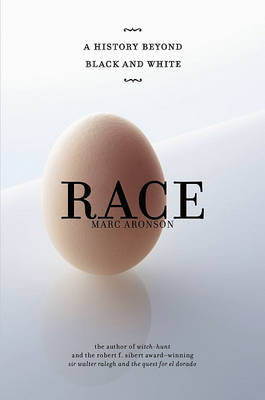 Race: A History Beyond Black and White

Description - Race: A History Beyond Black and White by Marc Aronson

Race. You know it at a glance: he's black; she's white. They're Asian; we're Latino. Racism. I'm better; she's worse. Those people do those kinds of things. We all know it's wrong to make these judgments, but they come faster than thought. Why? Where did those feelings come from? Why are they so powerful? Why have millions been enslaved, murdered, denied their rights because of the color of their skin, the shape of their eyes?

This astounding book traces the history of racial prejudice in Western culture back to ancient Sumer and beyond. Greeks divided the world into civilized and barbarian, medieval men wrote about the traits of monstrous men until, finally, Enlightenment scientists scrap all those mythologies and come up with a new one: charts spelling out the traits of human races.

Throughout most of human history, slavery had nothing to do with race. In fact, the idea of race itself did not exist in the West before the 1600s. But once the idea was established and backed up by "scientific" theory, its influence grew with devastating consequences, from the appalling lynchings in the American South to the catastrophe known as the Holocaust in Europe.

Book Reviews - Race: A History Beyond Black and White by Marc Aronson

» Have you read this book? We'd like to know what you think about it - write a review about Race: A History Beyond Black and White book by Marc Aronson and you'll earn 50c in Boomerang Bucks loyalty dollars (you must be a Boomerang Books Account Holder - it's free to sign up and there are great benefits!)


A Preview for this title is currently not available.
More Books By Marc Aronson
View All