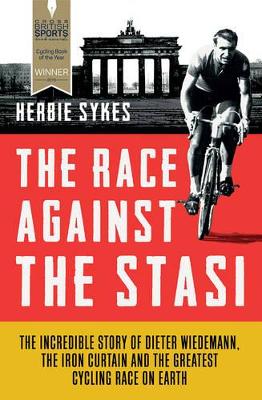 The Race Against the Stasi

The Incredible Story of Dieter Wiedemann, the Iron Curtain and the Greatest Cycling Race on Earth

Description - The Race Against the Stasi by Herbie Sykes

When the Iron Curtain descended across Europe, Dieter Wiedemann was a hero of East German sport. A podium finisher in The Peace Race, the Eastern Bloc equivalent of the Tour de France, he was a pin-up for the supremacy of socialism over the fascist West.

Unbeknownst to the authorities, however, he had fallen in love with Sylvia Hermann, a girl from the other side of the wall. Socialist doctrine had it that the two of them were class enemies , and as a famous athlete Dieter s every move was pored over by the Stasi. Only he abhorred their ideology, and in Sylvia saw his only chance of freedom. Now, playing a deadly game of cat and mouse, he plotted his escape.

In 1964 he was delegated, once and once only, to West Germany. Here he was to ride a qualification race for the Tokyo Olympics, but instead committed the most treacherous of all the crimes against socialism. Dieter Wiedemann, sporting icon and Soviet pawn, defected to the other side.

Whilst Wiedemann fulfilled his lifetime ambition of racing in the Tour de France, his defection caused a huge scandal. The Stasi sought to repatriate him, with horrific consequences both for him and the family he left behind. Fifty years on, and twenty-five years after the fall of the Berlin Wall, Dieter Wiedemann decided it was time to tell his story. Through his testimony and that of others involved, and through the Stasi file, which has stalked him for half a century, Herbie Sykes uncovers an astonishing tale. It is one of love and betrayal, of the madness at the heart of the cold war, and of the greatest bike race in history.

Buy The Race Against the Stasi by Herbie Sykes from Australia's Online Independent Bookstore, Boomerang Books.


Other Editions - The Race Against the Stasi by Herbie Sykes 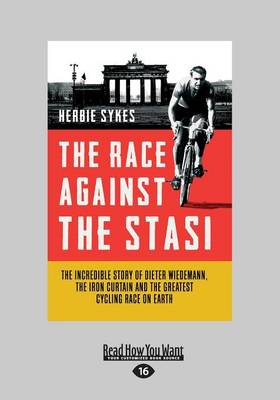 Book Reviews - The Race Against the Stasi by Herbie Sykes

» Have you read this book? We'd like to know what you think about it - write a review about Race Against the Stasi book by Herbie Sykes and you'll earn 50c in Boomerang Bucks loyalty dollars (you must be a Boomerang Books Account Holder - it's free to sign up and there are great benefits!)

HERBIE SYKES is a cycling journalist, historian and author of The Eagle of Canavese, about Franco Balmamion, Maglia Rosa: Triumph and Tragedy at the Giro d'Italia, and Coppi: Inside the Legend of Campionissimo Sykes lives in Turin, and writes for a number of cycling publications.

A Preview for this title is currently not available.
More Books By Herbie Sykes
View All

The Race Against the Stasi: The Incredible True Story of Dieter Wiedemann, the Iron Curtain and the Greatest Cycling Race on Earth
$44.99 $49.99