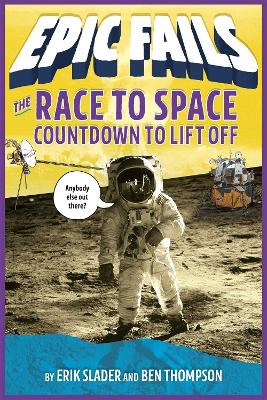 The Race to Space: A Failure to Launch (Epic Fails #2)

Description - The Race to Space: A Failure to Launch (Epic Fails #2) by Ben Thompson

Today, everyone is familiar with Neil Armstrong's famous first words when he set foot on the lunar surface: "one small step for man; one giant leap for mankind." He made it look easy, but America's journey to the moon was anything but simple. In 1957, when the Soviet Union launched Sputnik, the world's first satellite, into orbit, America had barely crossed the starting line of the great Space Race. Later that year, our first attempt was such a failure that the media nicknamed it "Kaputnik." Still, we didn't give up. With each failure, we gleaned valuable information about what went wrong, and how to avoid it in the future. So we tried again. And again. And each time we failed, we failed a little bit better. Each time, we got a little bit more creative.

In 1961, When Alan Shepard desperately needed a bathroom after waiting for hours past his scheduled launch time, already sealed into his aircraft, Mission Control problem-solved by temporarily shutting down the rocket's power... so that he could urinate into his suit without shorting the electronics on board. Later, when things didn't go as planned aboard the Gemini 8, Armstrong managed to slow an uncontrolled spin by firing the craft's re-entry thrusters.

In this humorous first installment of the Epic Fails series, Ben Thompson and Erik Slader take readers through the numerous failures that comprised the Space Race, paving the way for humanity's eventual success at reaching the stars. The Epic Fails series explores the humorous backstories behind a variety of historical discoveries, voyages, experiments, and innovations that didn't go as expected but succeeded nonetheless, showing that many of mankind's biggest success stories are the result of some pretty epic failures indeed.

Other Editions - The Race to Space: A Failure to Launch (Epic Fails #2) by Ben Thompson 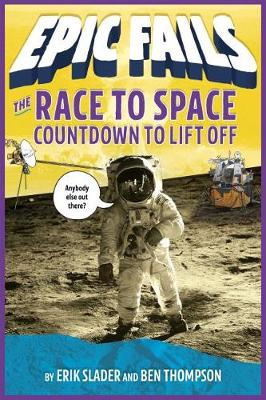 Book Reviews - The Race to Space: A Failure to Launch (Epic Fails #2) by Ben Thompson

» Have you read this book? We'd like to know what you think about it - write a review about Race to Space: A Failure to Launch (Epic Fails #2) book by Ben Thompson and you'll earn 50c in Boomerang Bucks loyalty dollars (you must be a Boomerang Books Account Holder - it's free to sign up and there are great benefits!)

Ben Thompson is the author of a dozen books on various awesome historical subjects including the Guts & Glory series, and has appeared on television programs for the History Channel, Discovery, and the American Heroes Channel. He has written for Cracked, Fangoria, Soldier of Fortune, and The American Mustache Institute, currently owns four swords (if you count a letter opener shaped like Glamdring the Foe-Hammer), and can occasionally beat the Star Wars Trilogy arcade game with a single quarter. Erik Slader is the creator of "Epik Fails of History" a blog (and podcast) about the most epic fails... of history.

A Preview for this title is currently not available.
More Books By Ben Thompson
View All