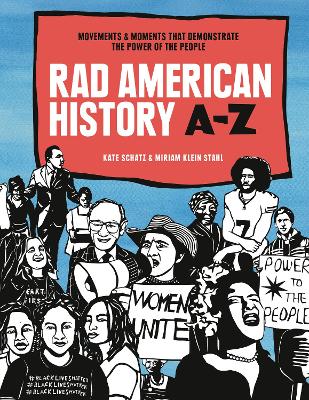 Rad American History A-Z: Movements That Demonstrate the Power of the People

Description - Rad American History A-Z: Movements That Demonstrate the Power of the People by Kate Schatz

"An engaging, fascinating, and necessary book that speaks truth to power."-Congresswoman Barbara Lee

InRad American History A-Z, each letter of the alphabet tells the story of a significant moment in America's progressive history--one that isn't always covered in history classes- A is for Alcatraz, and the Native occupation of 1969; C is for the Combahee River Raid, a Civil War action planned in part by Union spy Harriet Tubman; Z is for Zuccotti Park, and the Occupy movement that briefly took over the world.

There are tales of triumph, resilience, creation, and hope. Each engaging, fact-filled narrative illustrates an eye-opening moment that shows us how we got to now--and what we need to know about our histories to create a just and sustainable future.

"I wish I'd had Rad American History A-Z when I was growing up; it's a book I hope to read to my children one day. In such chaotic political times, this is a critical tool for young people to know how change happens, and to know that they, too, can make change happen. This book belongs on all library shelves as a transformative approach to history as we know it."-Alicia Garza, cofounder of Black Lives Matter Global Network

» Have you read this book? We'd like to know what you think about it - write a review about Rad American History A-Z: Movements That Demonstrate the Power of the People book by Kate Schatz and you'll earn 50c in Boomerang Bucks loyalty dollars (you must be a Boomerang Books Account Holder - it's free to sign up and there are great benefits!)


A Preview for this title is currently not available.
More Books By Kate Schatz
View All