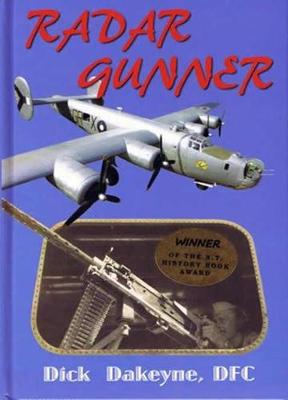 RADAR GUNNER is the autobiography of Dick Dakeyne who served as a gunner and radar countermeasures operator flying over Japanese enemy territory during World War Two. Born and raised in Sydney, Dick survived 48 missions and 500 hours flying with US Army Air Force bomb squadrons based at Fenton airstrip 140 kilometres south of Darwin in the Northern Territory of Australia.
Dick's account describes living with the Americans and flying in B-24 Liberator long-range heavy bombers, on record-breaking missions lasting up to 16 hours. Death surrounded him, with the loss of fellow servicemen from Japanese ack-ack (anti-aircraft) guns, machine gun fire from enemy planes, and bombing raids on northern Australia. Aircraft were lost from the hazards of flying vast distances over empty oceans, through tropical storms and into massive weather fronts.
For his military service and bravery, Dick was awarded the Distinguished Flying Cross. The United States also offered him one of their highest awards, the Medal of Freedom. However, the Australian Government's policy at the time barred Australians from receiving this American award, and on Dick's behalf, refused acceptance.

Winner of the 2015 Chief Minister's Book of the Year Award
This is simply a great new book, beautifully produced and presented. In 1942 Dick Dakeyne joined the ultra top-secret unit Section 22 (so named because it was run from Room 22 of General MacArthur's Brisbane Headquarters). Little has ever been written about this unit - Dick was trained to operate highly classified radar detection equipment installed on just a handful of aircraft. During regular bombing raids, his mission was to map out Japanese radar installations over enemy territory. His secondary mission was to operate a 50 calibre waist gun position in an American B-24 bomber. Dick spent the war as a lone Australian embedded with American bomber crews of the 380th Bomb Group operating from northern Australia. This is a hugely interesting book illustrated by Dick's wartime photo collection - including some incredible shots taken during combat missions.

» Have you read this book? We'd like to know what you think about it - write a review about Radar Gunner book by Dick Dakeyne DFC and you'll earn 50c in Boomerang Bucks loyalty dollars (you must be a Boomerang Books Account Holder - it's free to sign up and there are great benefits!)