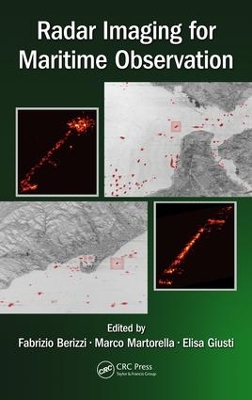 Based on the experiences of the Department of Information Engineering of the University of Pisa and the Radar and Surveillance System (RaSS) national laboratory of the National Interuniversity Consortium of Telecommunication (CNIT), Radar Imaging for Maritime Observation presents the most recent results in radar imaging for maritime observation. The book explores both the areas of sea surface remote sensing and maritime surveillance providing key theoretical concepts of SAR and ISAR imaging and more advanced and ad-hoc techniques for applications in maritime scenarios. The book is organized in two sections. The first section discusses the fundamentals of standard SAR/ISAR processing and novel imaging techniques, such as Bistatic, Passive, and, 3D Interferometric ISAR. The second section focuses on the applications and results obtained by processing real data from maritime observations like SAR image processing for oil spill, detection in SAR images and fractal analysis. Useful to both beginners and experts in maritime observation, this book provides several examples of (mainly space-borne) radar imaging of maritime targets. Nevertheless, the same principles and techniques apply to the case of manned or unmanned carriers and to ground and air moving targets.

Other Editions - Radar Imaging for Maritime Observation by Fabrizio Berizzi » Have you read this book? We'd like to know what you think about it - write a review about Radar Imaging for Maritime Observation book by Fabrizio Berizzi and you'll earn 50c in Boomerang Bucks loyalty dollars (you must be a Boomerang Books Account Holder - it's free to sign up and there are great benefits!)

Fabrizio Berizzi received the Electronic Engineering Laurea and PhD degrees from the University of Pisa (Italy) in 1990 and 1994 respectively. He has been a full Professor of the Univ. of Pisa since Nov. 2009. He teaches "Radar techniques", "Signal Theory" at the Univ. of Pisa", and "Digital signal processing" at the Italian Navy Academic. He is a IEEE Senior member since 2006. He has been working on ISAR, SAR and radar systems since 1990. More than 200 papers, three chapters of books and a book on radar imaging have been published. Since 1992 Prof. Berizzi has been involved in several scientific projects as a Principal Investigator funded by Univ. Ministry, Defence Ministry, Italian and European Space Agencies, Industries, Tuscany region, ESA (European Space Agency), European Defense Agency. Prof. FabrizioBerizzi is the vice-director of the (Radar and Surveillance Systems) National Laboratory of CNIT since Dec. 2010. Marco Martorella received his Laurea degree in Telecommunication Engineering in 1999 (cum laude) and his PhD in Remote Sensing in 2003, both at the University of Pisa. He is now an Associate Professor at the Department of Information Engineering of the University of Pisa where he lectures "Fundamentals of Radar" and "Digital Communications" and an external Professor at the University of Cape Town where he lectures "High Resolution and Imaging Radar" within the "Masters in Radar and Electronic Defence". He is a regular visiting Professor at the University of Adelaide and at the University of Queensland in Australia. He is author of about 150 international journal and conference papers, three book chapters and a book entitled "Inverse Synthetic Aperture Radar Imaging: Principles, Algorithms and Applications". He has presented several tutorials at international radar conferences and organised a special issue on Inverse Synthetic Aperture Radar for the Journal of Applied Signal Processing. He is a member of the IET Radar Sonar and Navigation Editorial Board, a senior member of the IEEE and a member of AFCEA. He is also chair of the NATO SET-196 on "Multichannel/Multistatic radar imaging of non-cooperative targets" and co-chair of the NATO ET-093 on "Robust compressive sensing techniques for radar and ESM applications". He has been recipient of the 2008 Italy-Australia Award for young researchers, the 2010 Best Reviewer for the IEEE GRSL and the IEEE 2013 Fred Nathanson Memorial Radar Award. His research interests are mainly in the field of radar imaging, including passive, multichannel, multistatic and polarimetric radar imaging. Elisa Giusti received the Telecommunication Engineering Laurea (cum laude) and Ph.D. degrees from the University of Pisa (Italy) in 2006 and 2010, respectively. She is a researcher at the RaSS(Radar and Surveillance System) National Laboratory of CNIT (National Inter-University Consortium for Telecommunications). She has been involved as a researcher in several projects funded by Italian ministries (Ministry of Defence, Ministry of Economic Development, etc.) and European organisations (EDA, ESA) since 2009. She is a co-author of several papers and a book chapter. Her research interests are mainly in the field of radar imaging, including active, passive, bistatic and multistatic, polarimetric radar.

A Preview for this title is currently not available.
More Books By Fabrizio Berizzi
View All