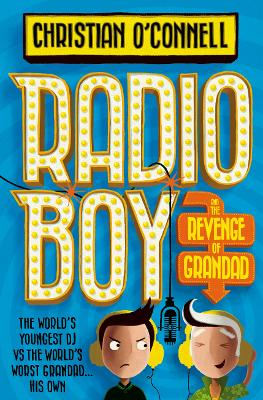 Radio Boy and the Revenge of Grandad

Description - Radio Boy and the Revenge of Grandad by Christian O'Connell

Debut sensation Christian O'Connell is back with more hilarious adventures of Spike, super-star radio DJ... and trouble-prone ordinary kid.
The World's youngest DJ is still the talk of the town. A town that's about to turn against him.

Radio Boy and his team, Artie and Holly, are back and continue to broadcast live to the world from Spike's garden shed.

Then, following a shock split from Nan, Grandad Ray comes to stay. Spike decides to cheer him up by inviting him onto the show. He becomes an instant hit with the listeners and Spike keeps him on as a new team member.

But things get really awkward when Spike realises Grandad Ray only has three stories and keeps telling them over and over again. Spike is forced to sack his own Grandad, who swears vengeance on his own grandson. Grandad Ray is the world's most competitive man and he always plays to win - at any cost...

» Have you read this book? We'd like to know what you think about it - write a review about Radio Boy and the Revenge of Grandad book by Christian O'Connell and you'll earn 50c in Boomerang Bucks loyalty dollars (you must be a Boomerang Books Account Holder - it's free to sign up and there are great benefits!)

Christian O'Connell is a multi-award winning broadcaster who hosts commercial radio's biggest breakfast show, on Absolute Radio. He is also a touring stand up comedian with several sold out National tours and three critically acclaimed Edinburgh Festival shows. He has presented TV shows on Sky1, ITV and C5. He is married and a self-proclaimed 'shabby dad' to two daughters and lives in Surrey with two dogs.