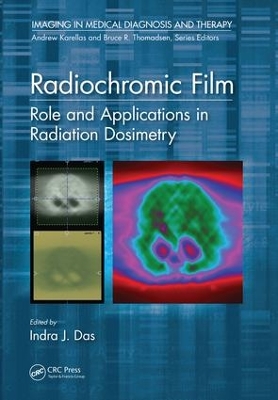 Role and Applications in Radiation Dosimetry

» Have you read this book? We'd like to know what you think about it - write a review about Radiochromic Film book by Indra J. Das and you'll earn 50c in Boomerang Bucks loyalty dollars (you must be a Boomerang Books Account Holder - it's free to sign up and there are great benefits!)

Indra J. Das, PhD, is currently the Vice Chair, Professor, and Director of Medical Physics in the Department of Radiation Oncology at New York University Langone Medical Center. Dr. Das is an internationally acclaimed medical physicist with expertise in radiation dosimetry, dose calculation, dose specification, small field dosimetry, treatment planning, nanoparticles, and proton beam therapy. He received his BSc, and MSc degrees from Gorakhpur University in India, followed by his Dip in Radiological Physics (DRP) from Bhabha Atomic Research Center in Trombay, Mumbai. He earned his MS in Medical Physics from the University of Wisconsin Madison, and PhD from the University of Minnesota, Minneapolis. He has previously held positions at the University of Massachusetts Medical Center, Fox Chase Cancer Center, University of Pennsylvania, and Indiana University School of Medicine. He was director of proton beam therapy at Indiana University, and adjunct professor at Purdue University, Osaka University, and Amrita Institute of Medical Science in Cochin, India. He is chair of the working group for proton beam therapy at the American Association of Physicists in Medicine (AAPM), and wrote standard of care guidelines for the American College of Radiology (ACR) proton beam working group.Ã£ He is an elected fellow of Institute of Physics and Engineering in Medicine (IPEM), AAPM, American College ofÃ£ Medical PhysicsÃ£ (ACMP), ACR, and American Society for Radiation Oncology (ASTRO).Ã£ He is also recipient of numerous accolades including the AAPM's Farrington Daniels Award (1988) and the AMPI's Dr. Ramaiah Naidu Award for life time achievement (2015). He has published over 400 abstracts, 21 books/chapters and over 200 peer reviewed scientific papers. He serves on the editorial board of many radiation journals, including Medical Physics, British Journal of Radiology, and International Journal of Radiation Oncology Biology and Physics and has delivered invited lectures throughout world.Ã£

A Preview for this title is currently not available.
More Books By Indra J. Das
View All