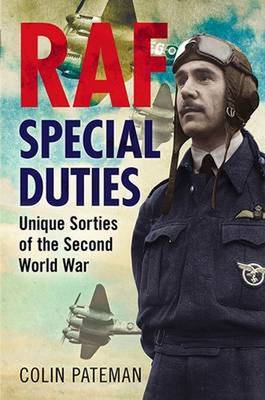 During the Second World War, the RAF employed Special Duties pilots and aircrew on operations across a wide range of extraordinary and daredevil missions. In many instances, specially selected and trained crews flew specific sorties, seeking out small targets of utmost importance to the war effort. A number of these operations were filmed by cameramen and RAF Special Duties: A Collection of Exclusive Operational Flying Sorties by the Royal Air Force enables their stories to be told for the first time. The various exploits in this exceptionally well-researched and gripping book are supported, in many instances, by 'Flying Logbooks' and other materials stemming directly from the pilots themselves. These men were true originals - undertaking hugely dangerous missions against the odds, and often operating as individual aircraft in completely unknown conditions. Accounts in the book include:Cameramen flying on special raids to film precise low level Mosquito sorties, including on the Gestapo HQ in Copenhagen; A Mosquito pilot flying a single aircraft into Germany to cause disruption by setting off air raid sirens; A Stirling pilot flying with radar-jamming equipment to disguise the D-Day invasion; Mosquito pilots attacking targets identified by British SAS units in France; Experience as a wireless operator flying in Churchill's personal aircraft; Dropping supplies over Burma

» Have you read this book? We'd like to know what you think about it - write a review about RAF Special Duties book by Colin Pateman and you'll earn 50c in Boomerang Bucks loyalty dollars (you must be a Boomerang Books Account Holder - it's free to sign up and there are great benefits!)

Colin Pateman lives in the south of England and has spent most of his working life as a police officer, retiring after thirty-two years' service. His key roles were as a handler of specialist search dogs and as a police search advisor. He was trained by the Royal Engineers and was involved in many serious criminal investigations. Pateman is an avid collector of aviation memorabilia and gains great satisfaction from gathering and preserving personal accounts of pilots and aircrews of the Second World War. His other aviation related publications include Goldfish Caterpillars and Guinea Pigs (Fonthill Media, 2012) Unwanted Hero (Fonthill Media, 2012), Unshackled Spirit (Fonthill Media, 2013) and Glorious in Solitude (Fonthill Media, 2013).

A Preview for this title is currently not available.
More Books By Colin Pateman
View All