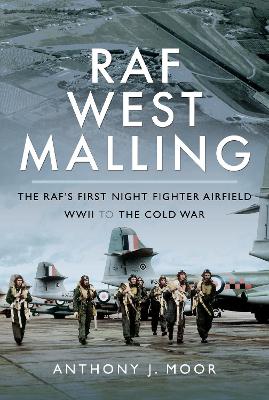 This is the story of West Malling airfield, from its earliest days through its role in the Second World War - when several dramatic and tragic events occurred - and beyond into the Cold War. Opened as a private landing ground after the First World War, the airfield at West Malling, then known as Kings Hill, became home to the Maidstone School of Flying in 1930. It was then renamed West Malling Airfield, and, in 1932, Maidstone Airport. The airfield's RAF role came to the fore in June 1940, by when the station had been fitted with a concrete runway. The first aircraft arrived on 8 June 1940. As the UK's first designated night fighter base, over the years that followed RAF West Malling was home to many famous pilots, men such as John Cunningham, Peter Townsend, Bob Braham and even Guy Gibson, later of Dambusters fame. During the summer of 1944, Mosquitoes, Spitfires and Mustang Mk.3s successfully destroyed many V-1s, as well as played their part in the D-Day landings. Following the war, units such as Nos. 25 and 85 squadrons were equipped with Meteor NF fighters and de Havilland Vampires and Venoms, continuing West Malling's strategic night fighter role into the Cold War. No.500 (Kent's Own) Squadron also adopted RAF West Malling as its home in this period. A US Navy Facility Flight was also based at the airfield in the 1960s. After closure as an operational air station in 1969, West Malling re-acquired its civilian guise, hosting a Gliding School, Short Brothers and several major Great Warbirds Air Displays during the 1970s and 1980s, until eventually closing completely as an airfield, for re-development. Anthony J. Moor's exhaustively researched and highly-illustrated book is the first to tell the full story of the part West Malling played in the defence of the United Kingdom, and how it served the RAF for twenty-eight action-packed years. AUTHOR: Anthony John Moor was educated at the Royal Naval School, Tal Handaq, Malta GC. On his return to the UK he served a five-year apprenticeship with Hawker Siddeley Aviation, which began at the De Havilland Technical School at Astwick Manor, shortly after De Havilland Hatfield had been taken over by HSA. He later worked in Germany as a draughtsman with AEG Gas Turbines, and engineering companies in the UK. In the 1980s Anthony worked with Metair Aircraft Equipment at West Malling. He is the author of five previous books on former airfields in Kent, namely Brenzett ALG, the Home Defence airfield at Throwley, near Faversham, Detling, Lympne, and Ramsgate Airport, and has written various aviation articles. He lives in Ashford, Kent.

» Have you read this book? We'd like to know what you think about it - write a review about RAF West Malling: The RAF's First Night Fighter Airfield - WWII to the Cold War book by Moor, Anthony J and you'll earn 50c in Boomerang Bucks loyalty dollars (you must be a Boomerang Books Account Holder - it's free to sign up and there are great benefits!)


A Preview for this title is currently not available.
More Books By Moor, Anthony J
View All