No tennis player since Andre Agassi has captivated the world like Rafael Nadal. He's a rarity in today's sporting arena - a true sportsman who chooses to let his raw talent, dedication and humility define him.This autobiography, written by Nadal with award-winning journalist John Carlin, includes memorable highlights such as winning the Wimbledon 2008 final in what John McEnroe called, the greatest game of tennis ever played and completing a career Grand Slam after winning the French Open, Wimbledon and the US Open in 2010.This book gives Nadal's millions of fans what they've been waiting for - a glimpse behind the racquet to learn what really makes Nadal - an intensely private person who until now has never talked about his personal and family life - tick.

Other Editions - Rafa: My Story by Rafael Nadal 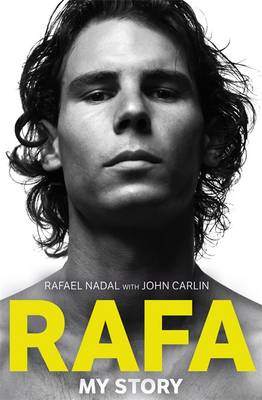 » Have you read this book? We'd like to know what you think about it - write a review about Rafa: My Story book by Rafael Nadal and you'll earn 50c in Boomerang Bucks loyalty dollars (you must be a Boomerang Books Account Holder - it's free to sign up and there are great benefits!)

Rafael Nadal is a 26 year old professional tennis player, and winner of nine grand slam singles titles to date. He is without a doubt one of the greatest players the game has ever seen.John Carlin is an award-winning British journalist and author.