"You either lie down and die, or you fight."

In 1938 a knockabout 11-year-old kid from Marrickville, Sydney, is suddenly confronted by mortality. His mother dies. His father has little time for him and at 14 he leaves school to learn a trade.

In 2016 that same boy is a multi-millionaire. He owns - and runs - the Australian Development Corporation, Sydney City Marine, a host of associated companies and countless office and housing blocks. He is also one of the world's most successful sailors, having won Sydney-Hobart races in his Ragamuffin yachts and competed eight times for Australia in the Admiral's Cup. He jointly holds the record for the most America's Cup campaigns - all self-funded and managed personally.

He is Syd Fischer, the Ragamuffin man, and he's known as perhaps the toughest and most uncompromising Australian businessman and sportsman of the past half century. This is the story of Fischer's remarkable life, and of his unrelenting quest to win the Sydney-Hobart Yacht Race one more time.

'It's as if Syd has suddenly decided that it's time to shrug off his lifelong reluctance to talk about himself and let us all now see what really makes him tick.'- Sir James Hardy

Other Editions - Ragamuffin Man: The World of Syd Fischer by David Salter 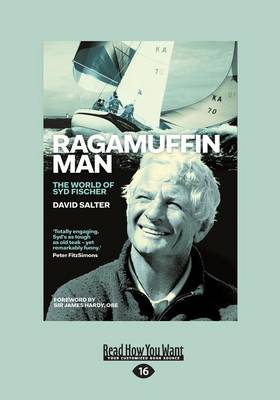 » Have you read this book? We'd like to know what you think about it - write a review about Ragamuffin Man: The World of Syd Fischer book by David Salter and you'll earn 50c in Boomerang Bucks loyalty dollars (you must be a Boomerang Books Account Holder - it's free to sign up and there are great benefits!)