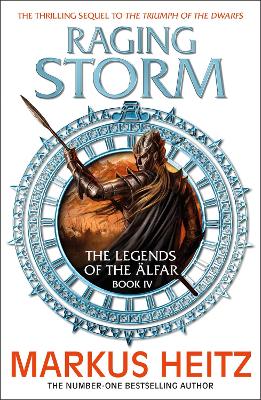 Raging Storm: The Legends of the Alfar Book IV

Description - Raging Storm: The Legends of the Alfar Book IV by Markus Heitz

THE THRILLING SEQUEL TO THE TRIUMPH OF THE DWARVESThe Hidden Land lies broken. In the terrible battle to save the home of the dwarves, elves and humans, many sacrifices were made by great heroes, and at the last the alfar were defeated. Aiphaton, the son of the indelible and erstwhile Emperor of the Alfar, has sworn that his race will never again pose such a dire threat to the world; he is determined to seek out and destroy the last of his own people.But there may be a greater enemy to face: an enigmatic mage with powerful magic at her fingertips is threatening the entire country.Suddenly the Hidden Land's greatest enemy has become its only hope . . .The action never lets up in this next exciting story in the saga of the dwarves and the alfar! 'Tolkien with a dash of Gemmell and a sprinkling of George R.R. Martin' Malazan Empire

» Have you read this book? We'd like to know what you think about it - write a review about Raging Storm: The Legends of the Alfar Book IV book by Markus Heitz and you'll earn 50c in Boomerang Bucks loyalty dollars (you must be a Boomerang Books Account Holder - it's free to sign up and there are great benefits!)


A Preview for this title is currently not available.
More Books By Markus Heitz
View All