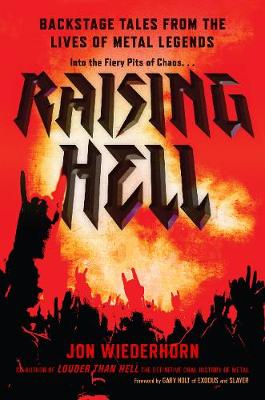 Raising Hell: Backstage Tales from the Lives of Metal Legends

In his song You Can't Stop Rock and Roll Ozzy Osbourne sings, 'Rock and roll is my religion and my law.' And that's why Raising Hell is a must-have for anyone who wants to read about the iconoclastic culture of headbangers and the wild lives they lead. The book contains the crazy, funny and sometimes horrifying anecdotes musicians have told about a lifestyle both invigorating and at times self-destructive.

The metal genre has always been populated by colourful individuals who have thwarted convention and lived by their own rules. For many, vice has been virtue, and the opportunity to record albums and tour has been an invitation to push boundaries and open a Pandora 's Box of wild experiences. Even before they joined bands, the urge for metal-heads to rebel and a seemingly contradictory need to belong was ingrained in their DNA. Whether they were oddballs who didn't fit in or angry kids from troubled backgrounds, metal gave them a sense of identity and became more than a form of music.

» Have you read this book? We'd like to know what you think about it - write a review about Raising Hell: Backstage Tales from the Lives of Metal Legends book by Jon Wiederhorn and you'll earn 50c in Boomerang Bucks loyalty dollars (you must be a Boomerang Books Account Holder - it's free to sign up and there are great benefits!)


A Preview for this title is currently not available.
More Books By Jon Wiederhorn
View All