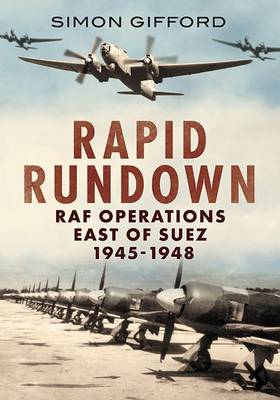 The immediate post-VJ-Day period of RAF history is often consigned to be little more than a footnote in most published accounts. In this first detailed look at the RAF in the Middle and Far East regions in the three years following the end of the war, the RAF's role in stemming the flow of immigrants into Palestine and flying whilst under terrorist attack in Palestine is examined. Further chapters highlight the RAF's roles in Iraq, Cyprus and flying strike missions over Aden, and then look at the RAF's operations over India including some of the first humanitarian airdrops for which the RAF became famous. Attention is then turned to the RAF's return to the Malayan peninsular and how the RAF became embroiled in the beginnings of the Malayan Emergency. Finally, Rapid Rundown: RAF Operations East of Suez 1945-1948 looks at the RAF's involvement beyond the boundaries of the Empire with Spitfires flying over Siam, French Indo-China and Japan, and how it flew combat operations in the Dutch East Indies. The book is copiously illustrated with many unpublished images and is enlivened by many RAF veterans' first-hand and eyewitness accounts.

» Have you read this book? We'd like to know what you think about it - write a review about Rapid Rundown book by Simon Gifford and you'll earn 50c in Boomerang Bucks loyalty dollars (you must be a Boomerang Books Account Holder - it's free to sign up and there are great benefits!)

Simon Gifford's father served in the RAF and uncle who flew Avro Lancasters from Palestine. Gifford is a life-long aviation enthusiast with a particular interest in the post-war RAF. He has had many articles on aviation published in some of the UK's leading aviation magazines.