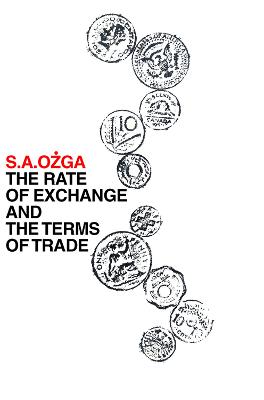 The Rate of Exchange and the Terms of Trade

Description - The Rate of Exchange and the Terms of Trade by S. A. Ozga

This volume originated in a course of lectures which the author originally gave at the Universitu lnternationale de Sciences Comparues at Luxembourg. The book appeared under the title of the course, and followed the same pattern. In the course of revisions the analysis has been carried a little further than it was originally presented, and many details have been added to its algebraic parts. In spite of these amplifications, however, the text remains on the level of elementary economics, and may be recommended to students whose interest in the subject is ahead of their technical background.

Ozga provides an intelligible theoretical outline of the rate of exchange, the terms of trade, and the balance of trade that brings into focus the complementarity of various widely used models. Simple supply and demand relations are developed to establish a link between the classical and Keynesian approaches and between the partial and the general equilibrium methods; and the emphasis is always on clarifying the part that the relations considered in individual models would actually play in a more comprehensive system.

Requiring some familiarity with economic theory but no previous training in mathematics, this simple and concise volume is exceptionally well suited to courses on the macro-theory of international trade and is useful reading for all courses in macroeconomics.

Buy The Rate of Exchange and the Terms of Trade by S. A. Ozga from Australia's Online Independent Bookstore, Boomerang Books.

Other Editions - The Rate of Exchange and the Terms of Trade by S. A. Ozga Book Reviews - The Rate of Exchange and the Terms of Trade by S. A. Ozga

» Have you read this book? We'd like to know what you think about it - write a review about Rate of Exchange and the Terms of Trade book by S. A. Ozga and you'll earn 50c in Boomerang Bucks loyalty dollars (you must be a Boomerang Books Account Holder - it's free to sign up and there are great benefits!)

S. A. Ozga was born in Poland and received his first doctorate in economics in Warsaw. He obtained then a Ph.D. degree at the University of London and joined the staff of the London School of Economics, where at present he holds a readership in economics. His many contributions, covering a wide range of subjects in utility theory, in the theory of the firm, of international trade and of economic growth, have been published in Economica, The Economic Journal and The Review of Economic Studies in the United Kingdom, in The Journal of Political Economy and The Quarterly Journal of Economics in the United States, and in Rivista di Politica Economica in Italy.

A Preview for this title is currently not available.
More Books By S. A. Ozga
View All