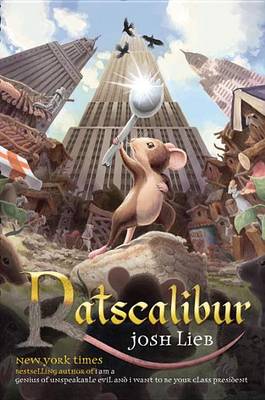 "When Joey is bitten by a rat, he goes from aspiring seventh-grader to three-inch tall rodent, and unwittingly unlocks the sword Ratscalibur"--

» Have you read this book? We'd like to know what you think about it - write a review about Ratscalibur book by Josh Lieb and you'll earn 50c in Boomerang Bucks loyalty dollars (you must be a Boomerang Books Account Holder - it's free to sign up and there are great benefits!)

Josh Lieb is the producer and showrunner of The Tonight Show Starring Jimmy Fallon. He won seven Emmy Awards as writer and producer of The Daily Show with Jon Stewart and has written and produced multiple other television shows, including The Simpsons and NewsRadio. His novel I Am a Genius of Unspeakable Evil and I Want to Be Your Class President was a New York Times best seller. He's married with two children and lots of animals. Follow him on Twitter @JoshLieb9.

A Preview for this title is currently not available.
More Books By Josh Lieb
View All