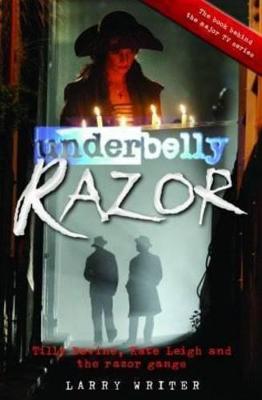 This Underbelly TV tie-in edition is the acclaimed, award-winning history of the Razor gangs - now the basis for Channel 9's 13-part blockbuster - Underbelly Razor.In the 1920s and '30s in inner Sydney, some of the most terrifying criminals in Australia's history waged war with razor and gun. As gang fought gang, the streets echoed with the sound of violence and ran with blood.Razor chronicles in compelling detail the nether word ruled by fabled vice queens Tilly Devine and Kate Leigh, and financed by the spoils of illegal drugs and alcohol, prostitution, gambling and extortion. Gangsters such as Guido Calletti, Big Jim Devine and Frank 'the Little Gunman' Green killed, robbed and slashed with impunity. Facing them were the police - some corrupt, some honest, and a few as tough and feared as the razor gangs they fought.Razor is the fascinating true story of the people who lived and died in this world of violence and vice. Razor brings a city's dark past back to life, and ensures that you will never look at inner Sydney in quite the same way again.

» Have you read this book? We'd like to know what you think about it - write a review about Razor (Underbelly) book by Larry Writer and you'll earn 50c in Boomerang Bucks loyalty dollars (you must be a Boomerang Books Account Holder - it's free to sign up and there are great benefits!)

What an absolutely interesting read. The book is a much more indepth look at the story than the tv series. Packed full of interesting stories and photographs it is one book I found hard to put down at the end of the day. The intrigue, sheer audacity and colourful lives of all the characters in Underbelly - Razor left you at times shaking your head and being grateful you didnt grow up in those times along side them. Some characters are utterly likeable and some will have you hissing revolt at them but all the while you enjoy the pace and seeing into the lives of all the people involved. I found at times some of the writing was going over old ground but in a story so entwined in other characters this was bound to happy. A great read.

Larry Writer is an award-winning author and freelance magazine feature writer. He is the co-author of Newk, John Newcombe's bestselling autobiography, as well as Chrissy Amphlett's memoir, Pleasure and Pain. Writer was previously a senior journalist and editor at Time Inc. Australia, working out of the London Bureau for two years before assuming the role of executive editor. Writer was also an editor, writer and London bureau chief for Australian Consolidated Press, and a co-founder of Ironbark Press.