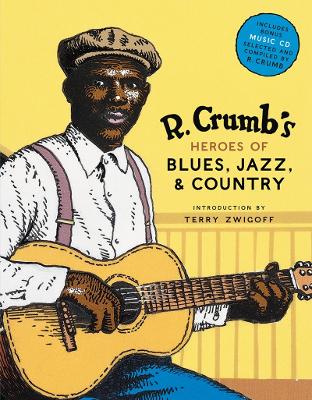 R.Crumb's Heroes of Blues, Jazz and Country (with CD)

Description - R.Crumb's Heroes of Blues, Jazz and Country (with CD) by Robert Crumb

Anyone who knows R. Crumb?s work as an illustrator knows of his passion for music. And all those who collect his work prize the Heroes of the Blues, Early Jazz Greats, and Pioneers of Country Music trading card sets he created in the early to- mid-1980s. Now they are packaged together for the first time in book form, along with an exclusive 21-track CD of music selected and compiled by Crumb himself (featuring original recordings by Charley Patton, ?Dock? Boggs, ?Jelly Roll? Morton, and others). A bio of each musician is provided, along with a full-color original illustration by the cartoonist. A characteristically idiosyncratic tribute by an underground icon to the musical innovators who helped inspire him, R. Crumb?s Heroes of Blues, Jazz & Country is a must-have collection for Crumb aficionados, comics fans, and music lovers alike.

» Have you read this book? We'd like to know what you think about it - write a review about R.Crumb's Heroes of Blues, Jazz and Country (with CD) book by Robert Crumb and you'll earn 50c in Boomerang Bucks loyalty dollars (you must be a Boomerang Books Account Holder - it's free to sign up and there are great benefits!)

Stephen Calt is the author of two acclaimed musical biographies, King of the Delta Blues: The Life and Music of Charlie Patton (Rock Chapel Press, 1988) and I'd Rather Be the Devil: Skip James and the Blues (Da Capo Press, 1994). He lives in New York City. Richard Nevins is a musicologist and co-founder of Shanachie Entertainment, an independant record label that began in 1975 specializing in Irish folk music, eventually expanding into jazz, reggae, blues, folk, rock and other genres. Terry Zwigoff is the award-winning director of the documentary Crumb.

A Preview for this title is currently not available.
More Books By Robert Crumb
View All