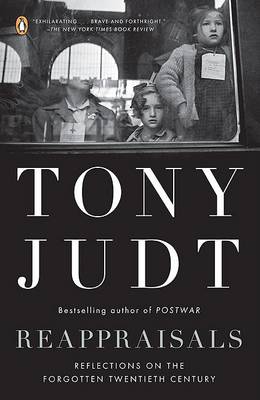 Reflections on the Forgotten Twentieth Century

From one of the greatest historians and public intellectuals comes these reflections on a 20th century that is turning into ancient history with unprecedented speed, and at great cost to understanding and truth.

» Have you read this book? We'd like to know what you think about it - write a review about Reappraisals book by Professor of History Tony Judt and you'll earn 50c in Boomerang Bucks loyalty dollars (you must be a Boomerang Books Account Holder - it's free to sign up and there are great benefits!)

Tony Judt was the Erich Maria Remarque Professor of European Studies at New York University, as well as the founder and director of the Remarque Institute, dedicated to creating an ongoing conversation between Europe and the United States. He was educated at King's College, Cambridge, and the Ecole Normale Superieure, Paris, and also taught at Cambridge, Oxford, and Berkeley. Professor Judt was a frequent contributor to The New York Review of Books, The Times Literary Supplement, The New Republic, The New York Times, and many journals across Europe and the United States. He is the author or editor of fifteen books, including Thinking the Twentieth Century, The Memory Chalet, Ill Fares the Land, Reappraisals: Reflections on the Forgotten Twentieth Century, and Postwar: A History of Europe Since 1945, which was one of The New York Times Book Review's Ten Best Books of 2005, the winner of the Council on Foreign Relations Arthur Ross Book Award, and a finalist for the Pulitzer Prize. He died in August 2010 at the age of sixty-two.

A Preview for this title is currently not available.
More Books By Professor of History Tony Judt
View All