This volume examines the multiple forms of reasoning in Indian politics and explores a framework to understand them. In the process, it looks at a series of issues involving the relationship between politics and philosophy, including the status of political theory, political practices, identity politics, and political ontology. The book argues that in the years leading up to and soon after independence, the task of conceptualizing politics was largely in the domain of practising politicians who built theories and philosophical methods, and further took those visions into the practice of their politics. It maintains that Indian politicians since then have not been as inclined to articulate their theories or methods of politics. 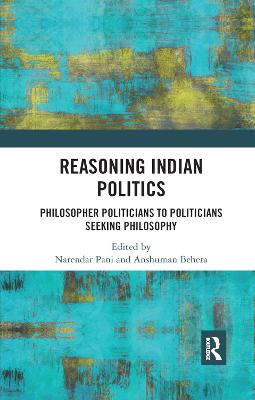 » Have you read this book? We'd like to know what you think about it - write a review about Reasoning Indian Politics book by Narendar Pani and you'll earn 50c in Boomerang Bucks loyalty dollars (you must be a Boomerang Books Account Holder - it's free to sign up and there are great benefits!)

Narendar Pani is Professor at the National Institute of Advanced Studies, Bengaluru, India. He has been writing on politics in both academia and the media since the 1980s. His research interests lie in his interpretation of the Gandhian method to understand current Indian and global realities. This method, as explored in his book, Inclusive Economics: Gandhian Method and Contemporary Policy (2001), seeks an alternative to ideology-centric approaches to the social sciences. Anshuman Behera is Assistant Professor in the Conflict Resolution Programme at the National Institute of Advanced Studies, Bengaluru, India. A co-author of the book Militant Groups in South Asia (2014), his research interests deal with the socio-political conflicts in India and Nepal. In addition to extensive work on Maoism, he has also written on political processes in South Asia.

A Preview for this title is currently not available.
More Books By Narendar Pani
View All

Dynamics of Difference: Inequality and Transformation in Rural India
$226.80 $252.00