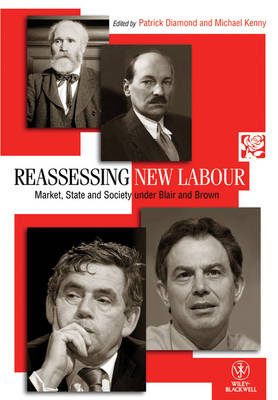 Market, State and Society Under Blair and Brown

An authoritative evaluation of the long-term legacy of New Labour.

Features brand-new essays from political figures associated
with the Labour party, senior commentators and leading academics,
all reflecting upon key policy areas and themes in relation to the
New Labour administrations

Includes a Foreword from Baron Neil Kinnock, former leader of
the Labour Party; an edited conversation regarding the prospects
for social democracy between Baroness Shirley Williams, leading Lib
Dem politician, and Tony Wright (former Labour MP); and fresh
evaluations of the Labour government?s record and failings
from the Shadow Minister John Denham MP

Raises highly topical and important questions about the
purpose and future of the Labour Party, and is designed to
stimulate debate about the political challenges facing the
centre-left in Britain

» Have you read this book? We'd like to know what you think about it - write a review about Reassessing New Labour book by Patrick Diamond and you'll earn 50c in Boomerang Bucks loyalty dollars (you must be a Boomerang Books Account Holder - it's free to sign up and there are great benefits!)

Patrick Diamond is a Doctoral Student at SheffieldUniversity, Gwilym Gibbon Fellow at Nuffield College, Oxford, and aVisiting Fellow in the Department of Politics at the University ofOxford. Patrick is also an elected member of SouthwarkCouncil. He was previously Head of Policy Planning in 10Downing Street and Senior Policy Adviser to the Prime Minister.Patrick has spent ten years as a Special Adviser in various rolesat the heart of British Government, including No.10 Downing Street,the Cabinet Office, the Northern Ireland Office, and the Equalityand Human Rights Commission (EHRC) where he served as GroupDirector of Strategy. Michael Kenny is Professor of Politics at the Universityof Sheffield. He has published widely in the fields of politicalthought, British politics and public policy. In 2010 he was aVisiting Research Fellow at the Centre for Research into the Arts,Social Sciences and Humanities at the University of Cambridge, andis an Associate at the Institute for Public Policy Research andDemos think-tanks. He is currently writing a book on the politicsof English nationhood.

A Preview for this title is currently not available.
More Books By Patrick Diamond
View All

The Crisis of Globalization: Democracy, Capitalism and Inequality in the Twenty-First Century
$37.59 $46.99