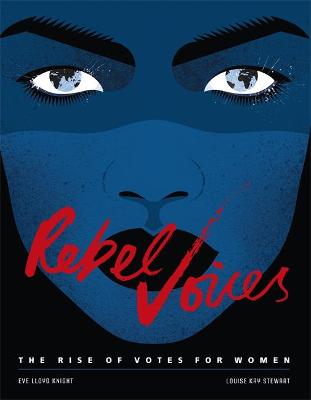 The Rise of Votes for Women

Beautifully illustrates the strength of the women across the world who fought for their right to vote in different ways ... as much a celebration of difference and diversity as it is a chronicle of women's rights - Stylist If you loved Goodnight Stories for Rebel Girls, Fantastically Great Women Who Changed the World or Women in Science then you'll love this!To celebrate 2018 - the Year of the Woman, and the anniversary of women winning the vote in the UK - this is a timely, beautiful and bold compendium of women around the world who said Time's Up on inequality. The book shares the story of the suffragettes, and of their sisters campaigning for equal rights globally. Discover how 40,000 Russian women marched through St Petersburg demanding their rights, one Canadian woman changed opinions with a play, and Kuwaiti women protested via text message. And read how women climbed mountains, walked a lion through the streets of Paris, and starved themselves, all in the name of having a voice and a choice. Tracing its history from New Zealand at the end of the 19th century, follow this empowering movement as it spread from Oceania to Europe and the Americas, then Africa and Asia up to the present day. And be inspired by the brave women who rioted, rallied and refused to give up. Stunningly illustrated by Eve Lloyd Knight, this book celebrates the women who stood up, spoke up, and refused to behave, rebelling against convention to give women everywhere a voice. And it shows what can be achieved when women stand together, and say enough.

» Have you read this book? We'd like to know what you think about it - write a review about Rebel Voices book by Louise K Stewart and you'll earn 50c in Boomerang Bucks loyalty dollars (you must be a Boomerang Books Account Holder - it's free to sign up and there are great benefits!)

Louise Kay Stewart (Author) Louise Kay Stewart studied women's writing at university and did a Masters degree in Women and Literature. She co-founded Aurora, a magazine featuring creative writing and illustrations by women, based in Liverpool. She then became an author, and has written more than 200 books for young people on a wide range of subjects. Eve Lloyd Knight (Illustrator) Eve Lloyd Knight is an illustrator, designer and art director based in London, whose work has been featured in Grazia Magazine, Stylist Magazine, New York Times, The Pool and Vue Cinemas. Eve produces bold and topical illustrations, with a specific focus on feminist issues.