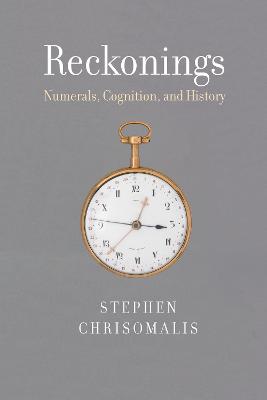 Insights from the history of numerical notation suggest that how humans write numbers is an active choice involving cognitive and social factors.

Over the past 5,000 years, more than 100 methods of numerical notation--distinct ways of writing numbers--have been developed and used by specific communities. Most of these are barely known today; where they are known, they are often derided as cognitively cumbersome and outdated. In Reckonings, Stephen Chrisomalis considers how humans past and present use numerals, reinterpreting historical and archaeological representations of numerical notation and exploring the implications of why we write numbers with figures rather than words.

Chrisomalis shows that numeration is a social practice. He argues that written numerals are conceptual tools that are transformed to fit the perceived needs of their users, and that the sorts of cognitive processes that affect decision-making around numerical activity are complex and involve social factors. Drawing on the triple meaning of reckon--to think, to calculate, and to judge--as a framing device, Chrisomalis argues that the history of numeral systems is best considered as a cognitive history of language, writing, mathematics, and technology.

Chrisomalis offers seven interlinked essays that are both macro-historical and cross-cultural, with a particular focus, throughout, on Roman numerals. Countering the common narrative that Roman numerals are archaic and clumsy, Chrisomalis presents examples of Roman numeral use in classical, medieval, and early modern contexts. Readers will think more deeply about written numbers as a cognitive technology that each of us uses every single day, and will question the assumption that whatever happened historically was destined to have happened, leading inevitably to the present.

» Have you read this book? We'd like to know what you think about it - write a review about Reckonings: Numerals, Cognition, and History book by Stephen Chrisomalis and you'll earn 50c in Boomerang Bucks loyalty dollars (you must be a Boomerang Books Account Holder - it's free to sign up and there are great benefits!)


A Preview for this title is currently not available.
More Books By Stephen Chrisomalis
View All