Recollections of the Great War in the Air

In 1915 James Roger McConnell enlisted as a US volunteer in the French Flying Corps. He was part of a remarkable band of American volunteers which were formed into the famous American 'Lafayette' Escadrille. 'Flying for France' was his personal account of the war in the air as seen through the eyes a front-line pilot of the American Escadrille, which was then based at Verdun. His memoirs produce an amazing insight into the early aerial battles and trace the evolution of aerial warfare as the rickety aircraft of 1915 rapidly evolved into the purpose built fighters of 1917. Casualties among the American Escadrille were very high and McConnell's own luck finally ran out when he was ambushed by two German fighters and was killed in action in March 1917. His gripping and detailed memoir of the war is his lasting memorial; his honest account of the everyday life of a pilot in the Great War is matched only by 'Sagittarius Rising'. However his dramatic description of the battlefield of Verdun viewed from above is one of the classic descriptions of any wartime memoir and is unmatched by any other Great War writer.
McConnell's memoir is made all the more moving by the fact that the reader is aware that the writer's life will soon be cut tragically short. Essential reading for anyone interested in military history or aviation.

Buy Recollections of the Great War in the Air by Bob Carruthers from Australia's Online Independent Bookstore, Boomerang Books. 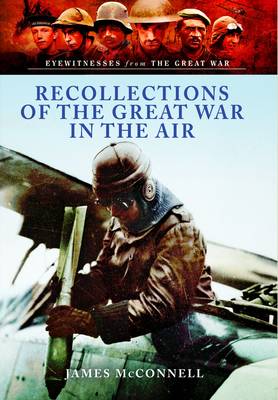 » Have you read this book? We'd like to know what you think about it - write a review about Recollections of the Great War in the Air book by Bob Carruthers and you'll earn 50c in Boomerang Bucks loyalty dollars (you must be a Boomerang Books Account Holder - it's free to sign up and there are great benefits!)