The Glazers and the FC Revolution

When the biggest club in the world was bought by an American venture capitalist predator, some fans decided to start a new club in protest

In 2004, Manchester United could proclaim itself the richest football club in the world, and boasted global commercial appeal alongside more than a decade of success on the pitch. In early 2005, American businessman Malcolm Glazer targeted a leveraged takeover of the club, and it looked set to be plunged into record levels of debt. The fans were furious. If the deal went wrong, it would threaten United's very existence, whilst the Glazers would be able to walk away without it having cost them a cent. Protests in the stands fell on deaf ears - it became increasingly clear that marches and placards wouldn't make any difference to the Glazer family.

In May 2005 the takeover went ahead. In response, one group of supporters took a drastic step- rather than meekly fall into line and - through rocketing ticket prices - help fund the Glazers' aims of cashing in on Manchester United's history and traditions, they took the plunge and formed a new club that started life in the tenth tier of English football. The decision tore Manchester United's fan base apart, and caused ructions that continue to this day.

This is the story of FC United of Manchester, the phenomenon born out of a supporter revolution. Established against all odds, its constitution enabled supporters to each own part of the club and have a direct say in how it was run. It also adopted a transparent manifesto and ensured it could never be sold on for profit.

However, as generations that have gone before will testify, modern football is now as much a business as it is a sport. How long can a club set up in opposition to a culture of greed stay true to its principles? And in a noble attempt to do so, could it ultimately tear itself apart? 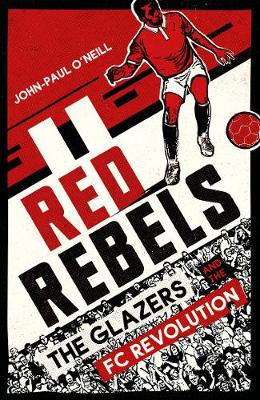 » Have you read this book? We'd like to know what you think about it - write a review about Red Rebels book by John-Paul O'Neill and you'll earn 50c in Boomerang Bucks loyalty dollars (you must be a Boomerang Books Account Holder - it's free to sign up and there are great benefits!)

John-Paul O'Neill has been writing about Manchester United for a variety of outlets for over 20 years, particularly for the now retired Red Issue fanzine. A founder member and season ticket holder at FC United, he is currently completing a law degree. He has an encyclopaedic and often first-hand knowledge of behind-the-scenes events at both FC and Old Trafford from the last 25 years.