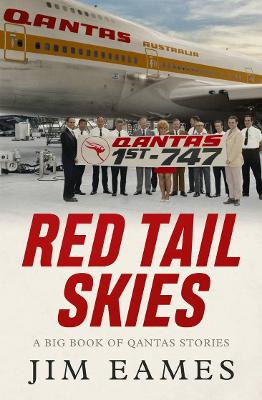 'These are stories of passion and dedication, of risk and resilience, of excellence and Australian larrikinism, of inventiveness and determination.' Captain Richard Champion de Crespigny on The Flying Kangaroo

'Jim Eames captures the experiences of a small band of brave, professional and pioneering aircrew who confronted the dangers of war.' Air Chief Marshal Sir Angus Houston AK, AFC (Ret'd) on Courage in the Skies

First published as the best-selling Courage in the Skies and The Flying Kangaroo
From the challenges of its earliest days to the significant but little known involvement in Australia's World War II campaigns and its surge into the jet age and beyond, these are the stories of the men and women, the risk takers and the characters who shaped Qantas.

Generous and richly told, Red Tail Skies is a warm-hearted reminder of why Qantas remains so important in the Australian psyche. It is the story of how a uniquely Australian style shaped the safest airline in the world.

» Have you read this book? We'd like to know what you think about it - write a review about Red Tail Skies: A big book of Qantas Stories book by Jim Eames and you'll earn 50c in Boomerang Bucks loyalty dollars (you must be a Boomerang Books Account Holder - it's free to sign up and there are great benefits!)


A Preview for this title is currently not available.
More Books By Jim Eames
View All

Courage in the Skies: The untold story of Qantas, its brave men and women and their extraordinary role in World War II
$18.39 $22.99