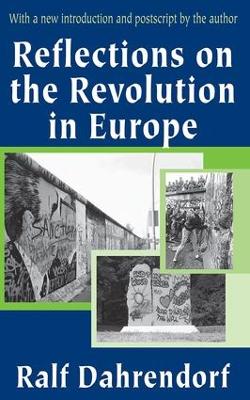 Reflections on the Revolution in Europe

Description - Reflections on the Revolution in Europe by Ralf Dahrendorf

The fall of the Berlin Wall in 1989 effectively ended the division of Europe into East and West, and the features of our world that have resulted bear little resemblance to those of the forty years that preceded the Wall's fall. The rise of a new Europe prompts many questions, most of which remain to be answered. What does it all mean? Where is it going to lead? Are we witnessing the conclusion of an era without seeing anything to replace an old and admittedly dismal ways of life? What will a market economy to do to the social texture of the various countries of East Central Europe? Will it not make some rich while many will become poorer than ever? And how can the rule of law be brought about? In this incisive and lucid book, Ralf Dahrendorf, one of Europe's most distinguished scholars, ponders these and other equally vexing questions. He regards what has happened in East Central Europe as a victory for neither of the social systems that once opposed each other across the Iron Curtain. Rather, he views these events as a vote for an open society over a closed society.
The continuing conundrum, he argues, which will plague peoples everywhere, will be how to balance the need for economic growth with the desire for social justice while building authentic and enduring democratic institutions. Reflections on the Revolution in Europe, which includes a new introduction from the author, is a humane, skeptical, and anti-utopian work, a manifesto for a radical liberalism in which the social entitlements of citizenship are as important a condition of progress as the opportunities for choice. A fascinating study of change and geopolitics in the modern world, Reflections points the way towards a new politics for the twenty-first century.

Other Editions - Reflections on the Revolution in Europe by Ralf Dahrendorf Book Reviews - Reflections on the Revolution in Europe by Ralf Dahrendorf

» Have you read this book? We'd like to know what you think about it - write a review about Reflections on the Revolution in Europe book by Ralf Dahrendorf and you'll earn 50c in Boomerang Bucks loyalty dollars (you must be a Boomerang Books Account Holder - it's free to sign up and there are great benefits!)

Ralf Dahrendorf, born in Hamburg, Germany in 1929, is a member of Britain's House of Lords. He was professor of sociology at Hamburg, Tubingen and Konstanz from 1957 to 1968, and in 1974 moved to Britain. He has been the director of the London School of Economics, warden of St. Antony's College, and pro vice-chancellor of the University of Oxford. He is the author of numerous books, including The Modern Social Conflict and After 1989: Morals, Revolution and Civil Society.

A Preview for this title is currently not available.
More Books By Ralf Dahrendorf
View All