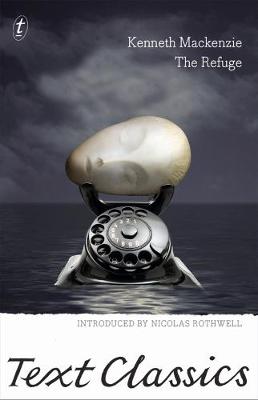 Description - The Refuge by Kenneth MacKenzie

Late at night Lloyd Fitzherbert, police reporter with the Sydney Gazette, is picked up by his man in CIB for a 'last-minute job that won't take a minute' at the morgue. A body has been found in the harbour. Irma, a beautiful young woman who fled persecution in Nazi Europe, is dead. She was Fitzherbert's lover. And, though the police don't know it yet, he killed her. Gripping and atmospheric, The Refuge is a murderer's confession - a tale of wartime Sydney, with its paranoia about communism and spies. Kenneth Mackenzie's last novel is utterly different to his lauded debut, The Young Desire It, yet it shares that book's psychological acuity and mastery of language. 'The history of a crime told as excitingly and with as much dramatic tension as anything by Graham Greene or Raymond Chandler.' Kenneth Slessor, Sun 'Remarkable...... A genuine personal tragedy.' A. D. Hope Sydney Morning Herald 'Fascinating, extremely skilful and subtle.' Sun-Herald 'One of our most gifted novelists.' Sunday Observer

» Have you read this book? We'd like to know what you think about it - write a review about Refuge book by Kenneth MacKenzie and you'll earn 50c in Boomerang Bucks loyalty dollars (you must be a Boomerang Books Account Holder - it's free to sign up and there are great benefits!)

Kenneth Mackenzie was born in 1913 in South Perth. His parents divorced in 1919, and he grew up with his mother and maternal grandfather on a property at Pinjarra, south of Perth. He was a sensitive child who developed an intense love of nature. At age thirteen Mackenzie was sent to board at Guildford Grammar School in Perth. His experiences there informed his first novel, The Young Desire It, published under the name Seaforth Mackenzie by Jonathan Cape in 1937. The author was just twenty-three. The novel drew praise from The Times, Spectator and Sydney Morning Herald; the Liverpool Daily Post called it `amazingly brilliant'. It was awarded the Australian Literature Society Gold Medal. By this time Mackenzie had studied law, worked as a journalist and moved to Sydney. There he met the leading lights of the literary scene-among them Kenneth Slessor and Norman Lindsay-and married. He and his wife had a daughter and a son. Mackenzie's subsequent novels were Chosen People (1938), Dead Men Rising (1951), based partly on his experience of the Cowra prisoner breakout, and The Refuge (1954). He also produced two volumes of poetry. Kenneth Mackenzie's last years were spent mainly alone, in declining health and battling alcoholism, at Kurrajong in New South Wales. On 19 January 1955 he drowned in mysterious circumstances while swimming in Tallong Creek, near Goulburn.

A Preview for this title is currently not available.
More Books By Kenneth MacKenzie
View All

The Life and Complete Trial of Kenith Mackenzie, Esq for the Wilful Murder of Kenith Murray Mackenzie, at Fort Morea, on the Coast of Africa, August, 1782, Who Was Tried, by a Special Commission, at Justice Hall in the Old Bailey
Available, ships in 8-11 days
$34.71 $38.57