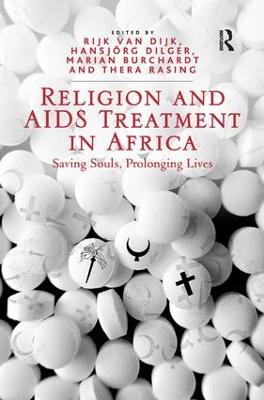 Religion and AIDS Treatment in Africa

Description - Religion and AIDS Treatment in Africa by Hansjoerg Dilger

This book critically interrogates emerging interconnections between religion and biomedicine in Africa in the era of antiretroviral treatment for AIDS. Highlighting the complex relationships between religious ideologies, practices and organizations on the one hand, and biomedical treatment programmes and the scientific languages and public health institutions that sustain them on the other, this anthology charts largely uncovered terrain in the social science study of the Aids epidemic. Spanning different regions of Africa, the authors offer unique access to issues at the interface of religion and medical humanitarianism and the manifold therapeutic traditions, religious practices and moralities as they co-evolve in situations of AIDS treatment. This book also sheds new light on how religious spaces are formed in response to the dilemmas people face with the introduction of life-prolonging treatment programmes.

Other Editions - Religion and AIDS Treatment in Africa by Hansjoerg Dilger » Have you read this book? We'd like to know what you think about it - write a review about Religion and AIDS Treatment in Africa book by Hansjoerg Dilger and you'll earn 50c in Boomerang Bucks loyalty dollars (you must be a Boomerang Books Account Holder - it's free to sign up and there are great benefits!)

Rijk van Dijk is an anthropologist working at the African Studies Centre, Leiden and a professor in the study of religion and sexuality in Africa at the University of Amsterdam. He is an expert on Pentecostalism, globalization & transnationalism, migration, youth, and healing. He has done extensive research and published on the rise of Pentecostal movements in urban areas of Malawi, Ghana and Botswana. He is the author of Young Malawian Puritans (Utrecht, ISOR Press, 1993) and has co-edited 7 books. With Ria Reis and Marja Spierenburg he co-edited The Quest for Fruition through Ngoma (Oxford, James Currey 2000) and with Wim van Binsbergen Situating Globality. African Agency in the Appropriation of Global Culture (Leiden, Brill 2004). His current research deals with the religious, in particular Pentecostal, engagements with the domains of sexuality and HIV/AIDS in Botswana. Recently published articles entitled 'Gloves in times of AIDS: Pentecostalism, Hair and Social Distancing in Botswana' (In: F. Becker ; P.W. Geissler (eds) Aids and Religious Practice in Africa, Leiden / Boston: Brill, Studies on Religion in Africa, 2009) and 'Marriage, commodification and the romantic ethic in Botswana.' (In: Marleen Dekker & Rijk van Dijk (eds) Markets of Well-being. Navigating Health and Healing in Africa, Leiden: Brill, African Dynamics Series No. 9, 2010) are dealing with insights gained from this ongoing research. He is also the chair of the International Research Network on religion and Aids in Africa. In addition, he is the Editor-in-chief of the newly established journal African Diaspora. A Journal of Transnational Africa in a Global World which is published by Brill, Leiden, as of 2008. HansjArg Dilger is a Professor of Social and Cultural Anthropology at the Freie UniversitAt Berlin. He has conducted long-term fieldwork on HIV/AIDS and social relations in Tanzania, focusing on the dynamics of kinship and Neo-Pentecostalism in the context of rural-urban migrat

A Preview for this title is currently not available.
More Books By Hansjoerg Dilger
View All